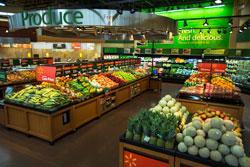 Just days before its annual meeting of shareholders, Walmart is vowing to up its commitment to produce, including a 100% money back guarantee on freshness. And it’s promising to train an impressive 70,000 of is employees on the nuances of managing fruits and vegetables, including weekly produce checks.

But experts say the Bentonville, Ark.-based retailer’s announcement is more or less a retread of existing policies, and a little like “announcing Walmart will now be cleaning their restrooms daily, and that employees will receiving special training in bathroom cleaning,” supermarket analyst David J. Livingston, based in Waukesha, Wisc., tells Marketing Daily. “It makes it sound like Walmart will have cleaner bathrooms, when this policy was actually already in place.”

“This is an effort to get people to focus on positive things, rather than the $110 million in environmental fines it was ordered to pay last week or last quarter’s international bribery scandal,” adds Jim Prevor, a supermarket analyst who blogs as the Perishable Pundit. “And have they really not been removing rotten produce from their shelves all along?”

Still, he points out that any proposed changes are worth watching. “Just because it has so many shoppers passing through, Walmart is the largest produce vendor in the U.S. But one of its major problems is that there are lots of people who shop at Walmart for parity products, like bleach or toys or packaged goods, but don’t buy produce there.”

Enticing those customers into the produce aisle is far more complex than serving the core Walmart customer, “with a family income of under $40,000,” he says. “They are very focused on price, and buy a lot at once -- one of the big reasons they shop at a place like Walmart is they can save money on gas. They are buying things like potatoes and onions and apples. The finer points of caring for raspberries don’t apply.”

Even its vow to double sales of locally grown produce by December 2015 is murky, he says, “since they define 'local' as something grown in the state where it’s sold. Walmart is still expanding at a faster-than-average rate in California, where most of the country’s produce comes from. So it can increase that 'local’ percentage just by opening more California stores.”

Still, he adds, any improvement may win it more fans among fresh-food lovers. “Walmart’s procurement is good, but the real problem has been in-store execution. So there is some hope that this training might impact things.”

And the company’s intention to shorten the time it takes to truck produce from farm to store will likely “cut some costs out of the distribution of its produce,” adds Livingston. “If it gets to the store a day earlier, that makes for a 'freshness’ story, when this is really a financial story. That’s a good spin.”