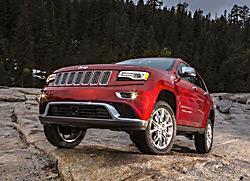 It is highly unusual for an automaker to diss the U.S. government when it comes to auto recalls, but Chrysler has made big news by doing so. And analysts say it is also making a big mistake.

To recap: Chrysler Group has said it will not follow the National Highway Traffic Safety Administration's (NHTSA) request that it recall 2.7 million of its Jeep Liberty (built from 2002 to 2007) and Jeep Grand Cherokee vehicles (from 1993 to 2004). Central to the three-year-long investigation is NHTSA's assertion that a faulty rear-gas-tank architecture has resulted in 44 deaths in 32 rear-end incendiary crashes in Grand Cherokees, with far fewer numbers in Liberty vehicles. Chrysler says the differences between those stats and everyone else's are miniscule.

Chrysler, for the record, also challenged a recall demand in 1996 over seatbelt issues, and won (thanks to John Roberts, who represented Chrysler back then, and currently sits on the Supreme Court), and no automaker has refused NHTSA since. The automaker also says its analysis shows such incidents "occur less than once for every million years of vehicle operation." The company says the vast majority of collisions are flank, front end and rollover. In its white paper on the contretemps, Chrysler offers a bar graph that puts the vehicles in question pretty much in the middle of the pack for rear-impact crashes resulting in fatal fires.

Brand and auto analysts say none of this matters. While it's hard to fault Chrysler these days for the problem -- it was a different company then, which puts it in a pretty unique position vis à vis recalls -- the company's refusal to cede to NHTSA's request keeps the ghosts of Chrysler's former owners haunting the halls of its Auburn Hills, Mich. headquarters, and hurts the current company’s brand equity -- not to mention the very successful current Grand Cherokee.

"It's the most moronic decision this year," says Todd Turner, head of auto consultancy Car Concepts. "Why would they start a fight that is only going to damage their reputation and further draw attention to the issue? They want to fight it because the recall will be costly, but it will cost them a lot more in damage to their reputation and consumer confidence if they don’t do it. It's a battle they just can't win."

George Cook, executive professor at the Simon Graduate School of Business at the University of Rochester (and a former Ford marketer), tells Marketing Daily that while Chrysler may have an argument, since "most cars have gas tanks in the rear and any high-velocity rear collision could cause a fire," Chrysler is rolling the dice big-time both with itself and with customers’ lives. "I'd rather take a proactive stance and not put the consumer in the middle.” It could also badly hurt the successful current Grand Cherokee, he notes. “Chrysler Group is back on track, but this could really hurt them."

Jim Sanfilippo, former auto marketer and former CEO of Hyundai Motor America's AOR Innocean USA, argues that frankly, Chrysler is taking a principled approach and wouldn't be taking this stand if they didn't think they had a leg to do it on. "This is no easy fix; conceivably this could cripple the company financially, so you know Chrysler has a responsibility to do due diligence and research to this issue."

The problem, he notes, is that vehicle cycles are so fast now that an automaker, with millions of units in operation, could be faced with vehicles three or four product cycles ago that now fall under the umbrella of potential issues by today's standards. "Even if they have met previous year's standards you have an issue. There have been horrendous cases of product liability lawsuits that were not just."

Sanfilippo says that observers should have "healthy skepticism" for both sides on the issue. "Chrysler is very thoroughly convinced they are on solid ground; there is no way they would take on government in the middle of the current machinations with Chrysler and Fiat [the latter is looking for a larger stake] otherwise; this is a real big issue internally. For them to say 'no' to NHTSA is not arbitrary."

Finally, Sanfilippo points out that this is not a Pinto issue, and shouldn't be mistaken as one. "I'm not sure I have confidence in NHTSA. I think it's very heathy for a car company to take issue. it's NHTSA's time in the barrel for this."