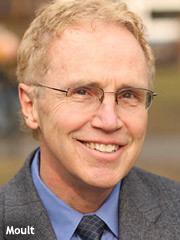 Marketing and media research industry vet Bill Moult has one of the most rational minds on Madison Avenue, but his decision to step down as head of Nielsen’s “knowledge collaborations” operations was a very emotional one -- in every sense of the word. Moult, a top Nielsen executive for the past couple of years, and the head of a number of successful marketing research start-ups, is leaving to run Innerscope Research, a company that uses neuroscientific principles to measure people's emotional responses to advertising, marketing and media content.

“We have virtually missed emotion,” Moult asserts, referring to the marketing research industry’s focus on measuring attitudes, perceptions and behaviors, but not those unconscious drivers -- emotions -- that influence them. Mainly, he says, it’s because Madison Avenue lacked the research methods to measure it, and the scientific principles to understand and apply it. That has changed in recent years, thanks to companies like Innerscope, one of several promising firms pioneering the so-called field of “neuromarketing research.”

The field, which is a key focus of the Advertising Research Foundations Audience Measurement conference in New York this week, utilizes various methods of measuring physiological or biometric data when people are exposed to advertising, marketing and media, and using science to explain not just what people are thinking and doing, but how they are feeling about it.

Moult has other emotional connections to his new role as CEO of Innerscope, including the fact that he has been a long-time adviser, helping founders Dr. Carl Marci and Brian Levine shape their final business plan before launching seven years ago, and helping to fine-tune it along the way. It was Moult, for example, who suggested Innerscope add eye-tracking to the other biometric data (heart rates, galvanic skin response) they track so they could precisely correlate emotional responses to the exact media or advertising content people are looking at.

The emotional icing on the cake, he says, is that the fact that his daughter just accepted a position to work as a doctor in a Boston area hospital -- a major factor in his decision to work at Boston-based Innerscope.

The timing couldn’t be better, say Dr. Marci and Levine, because Innerscope is poised to “scale” its research operations, following some new rounds of funding that will enable it to deploy its methods anywhere, anytime, including in front of conventional media screens, or even in stores at retail locations.

Dr. Marci will retain his role as chief science officer and chairman of Innerscope’s board, and Levine will remain president. They will focus on product development, innovation and execution, while Moult will work on expanding Innerscope’s relationship with Madison Avenue.

It's a role he played before, helping to innovate companies like The BASES Group in the early 1980s and ASI in the 1990s, and he likened the current state of neuromarketing research to the points in history that those earlier marketing research sciences were at at their seminal points.

Moult acknowledged that the opportunity is not without its challenges, but he plans to utilize some emotional appeals to convince marketers, agencies and media companies to help Innerscope scale the business. Interestingly, he says he had almost no direct contact with one of Innerscope’s chief competitors -- Nielsen’s NeuroFocus -- but he says he plans to work collaboratively with Joe Willke, a long-time Nielsen executive who recently took over running NeuroFocus, to raise the profile of neuromarketing research to the industry at large.