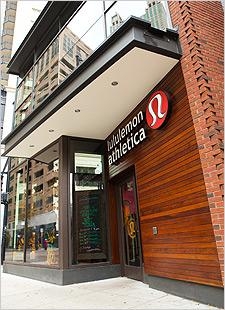 Lululemon CEO Christine Day has surprised observers, announcing that she will be leaving the Vancouver, Canada retailer as soon as a replacement can be found.

Among brand advocates and social-media experts, Lululemon is something of a darling, even following a major product snafu earlier this year that left throngs of its customers in nearly see-through yoga pants. And while that gaffe generated plenty of buzz and hurt the company’s quarterly results, it still managed to beat expectations.

The company broadcast Day’s news during its quarterly earnings conference call with investors. For its fiscal first quarter, it says net revenue rose 21% to $345.8 million, from $285.7 million in the first quarter of last year. Comparable stores gained 7%, on a constant dollar basis, and direct-to-consumer revenue climbed 40% to $54 million, accounting for about or 16% of total revenues. Gross profit advanced 9% to $170.7 million, which includes a provision of $17.5 million for inventories charged to the see-through britches affair.

"The past quarter has been one of the most important in our company's history,” she told investors on the call. “While we regret that we had quality issues, we are proud of the organization's ability to get Luon delivered back into our stores within 90 days. And the silver lining is that this caused us to take a big leap forward in owning our technical expertise.”

In other news, she says downloads of its new Om Finder app reached 50% of its annual goal in the first month, “further supporting yoga and our retail partners.”

Day’s answers to repeated questions regarding her departure were terse throughout the call -- saying that she had notified the board of her decision on Friday, and that a search committee had been formed over the weekend. “I had a great run,” she says. “I am proud of what we’ve accomplished, and I really look forward to welcoming the new CEO.”

Shares of the stock dipped on the news. Day, who had plenty of global retail experience prior to joining Lululemon, is seen as key to its Asian expansion plans.

Lululemon’s closest competitor in high-end performance yoga and athletic wear for women is Athleta, owned by the Gap.