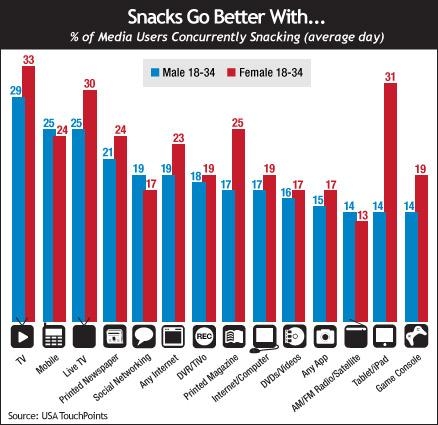 Snacking — like media consumption — is a behavior that is so prevalent that it occurs throughout the day across all demographics. The details of what and how much is consumed at different times may vary, but the consistency of the behavior does not.

A larger USA TouchPoints analysis sought to investigate all dimensions of the snacking behaviors of 18-34 year-olds. This extract looks specifically at the relationship between media consumption and snacking.

By understanding the percentage of media users within the target group that also snack while using different media, it becomes possible to better inform our understanding of which communication channels can be expected to deliver more people that are either considering snacking or actively snacking during their media use – thereby enabling us to leverage both relevance and potential receptivity.