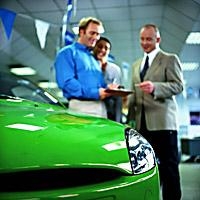 Mobile commerce is seeping into all corners of shopping, no matter the product size or price.

After I addressed a group of car dealers who wanted to know how they might leverage mobile in their dealerships recently, some of the questions revolved around the use of QR codes and pricing.

Specifically, some dealers wanted to know if they should include car pricing on their mobile listings and whether they should bother to include QR codes on the vehicles themselves.

The pricing issue answer was obvious, since mobile consumers with a tap or two could find out through apps like Kelly Blue Book the appropriate price of any particular car.

But the issue of QR codes was a bit more interesting.

If the QR code would simply route a scanning mobile shopper to a website, then it could be considered a waste of time. However, since dealers typically place physical price stickers on each car anyway, adding a relevant QR code would be only little added effort.

This begs the question of what the QR code should or could lead to.

An obvious one would be linkage to a fact sheet on the car. Maybe a link to a video with either the previous owner talking about how he or she cared for the car or a quick video of an expert highlighting certain aspects of the vehicle.

No matter the creative content, I suggested to the dealers that the higher value would be in the data they obtained from the scans.

Using scanning code platform such as ScanBuy or Spyderlynk would show dealers which cars are being scanned most often, when they are scanned, the locations of those vehicles on the lot and even some of the demographics of those doing the scanning.

Dealers could identify the high-interest vehicles and aggregate those cars to the front of the lot. They could analyze which types of vehicles are most frequently scanned, the best location for QR codes to be scanned based on number of scans and whether relocating the cars was effective, based on sales.

This is only one aspect of location a car dealer can leverage, there are many others.

Would you (or did you) use mobile to help shop for a new car?