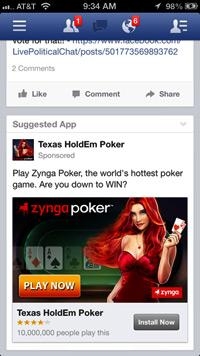 As marketers get more serious about mobile campaigns and struggle to achieve the same targeting and tracking here as they know from the Web, conquering the cookie problem is going to become a key differentiator among providers. Facebook clearly thinks this is one argument it can win in the mobile sphere. At last week’s OMMA RTB event in London, Facebook UK’s Sales Director Ed Couchman walked through some of the ways the social network will be both targeting users for advertisers no matter where the target is, and how it is leveraging mobile data from users to enrich the profiles that also can be targeted on any platform.

Couchman says that of the 1.1 billion people using Facebook, 922 million are on the desktop, 622 million are accessing the service on both desktop and device, and 254 million are mobile only. Over the last quarter, Facebook has seen even more time spent on devices -- an average up to 13 hours a month per user. The company is coming at the mobile marketer with a simple pitch that addresses the soft underbelly of the medium -- user targeting and tracking. “We have a wealth of native data around true identity plus social data to target against,” he says.

One simple example is a pitch they made to British Airways aimed at customer acquisition. “We built a custom segment of Facebook users that had checked in to both London and New York in a two-month period. We can bucket them as frequent fliers.”

In another example, the company can use mobile data in part to help build custom audiences for a marketer. They can take existing CRM data and re-find those users by matching them in Facebook using an email address or mobile phone number. The match rates, he says, are 65% on email but even higher -- 75% -- on phone numbers. They did this for a financial institution looking to lower customer servicing costs by moving these people into online banking. In addition to the CRM matching, they did lookalike clusters and targeted app downloads to the lot.

This all sounds fine in theory. First-party data is going to have special value on mobile platforms, and the respective social networks should be in an excellent position to exploit it. That is, when the campaigns are there to support it. I am still waiting for any obviously targeted ads to show up in my increasingly cluttered FB mobile feed. In twenty minutes of drilling into mine the other day I came up mainly with game app download pitches from EA and Zynga.

After all of these years both on the Web and mobile hearing about leveraging data, whether first- or third-party, for highly targeted advertising, I am still waiting to see how such an advanced ad ecosystem looks to the user.