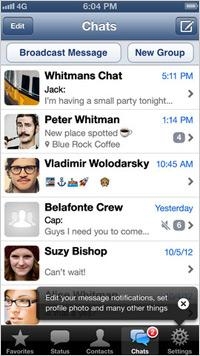 Messaging apps like WhatsApp and Snapchat have gained increasing attention for the sheer volume of activity their users generate.

More messages were exchanged through WhatsApp in the last 12 months, for example, than all mobile operators combined in any country, according to a Chetan Sharma report last week.

The rapidly growing use of these upstart apps collectively poses a potential threat to established social networks like Facebook that want to keep users on their own platforms. With Facebook becoming a mobile first company, it wants to make sure it dominates time spent on devices as it has on the desktop.

So far, competing services are having only a modest impact on Facebook, while higher mobile usage is driving continued share gains in engagement, according to a new report by JP Morgan analyst Doug Anmuth. That finding is based on an analysis of comScore desktop and mobile data over the last year through May.

What about in mobile specifically?

While Facebook’s desktop minutes per unique visitor have fallen to 331 minutes in May from 381 minutes a year earlier, mobile minutes per visitor have shot up to 783 from 471, with that total up monthly from 741 in April. “Overall, we actually believe that mobile usage can help offset some degree of typical summer seasonality which we might expect over the next few months,” wrote Anmuth.

Looking more closely at last month, his analysis found Facebook’s share of mobile actually grew, while that of competing services declined. Facebook’s share increased to 21% in May from 19% the prior month, while the combination of Instagram, Twitter, WhatsApp and Snapchat dipped to 5% from 6% in the same period.

Anmuth also noted that Facebook’s share of mobile time remains at roughly four times that of the other offerings combined. Still, it’s not hard to see why Facebook investors might be getting a bit nervous about engagement on Facebook with messaging apps hitting the top of the app charts. WhatsApp, for instance, is currently the No. 1 most downloaded paid iPhone app in the App Store.

Among free apps, Snapchat is at No. 9, and Kik Messenger at No. 26, with Facebook’s own Messenger app, ranked at No. 30. The messaging app mania hasn’t gone unnoticed by venture and other investors, with Snapchat closing a $60 million round of financing this week, at a reported $800 million valuation. Google was reportedly in talks this spring to buy WhatsApp for $1 billion.

For Facebook as well, the option remains of snapping up one of the hot messaging apps -- as it did Instagram last year. For now, it's busy enough trying to figure out how to monetize the mobile traffic it's already got.