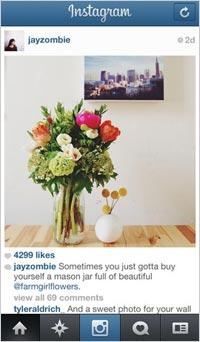 In unveiling video on Instagram last week, company founder Kevin Systrom explained the 15-second length was just right -- long enough for creative expression, but not too long for people to download. It also set Instagram apart from Vine’s six-second videos.

Setting aside the speculation on whether or when parent Facebook might roll out paid advertising on Instagram, the company is encouraging brands to embrace the new feature for marketing through their Instagram presence. It has released a set of best practices for video and highlighted high-profile names using the new service, like Nike, Burberry and GE.

While still early days, initial engagement data from analytics firm Simply Measured suggests that Instagram videos are driving more interaction on average than photos within the app and a much higher volume than Vine videos. First, 14 of the Interbrand 100 companies have begun to use video on Instagram, with a total of 23 videos posted through June 26.

In terms of interaction, Instagram videos from June 20-26 drew a total of 189,940 “likes” and comments, and an average of 8.258 per post compared to 8,008 for images. At least some of the engagement with video can be attributed to the novelty factor as users watch and respond to clips on Instagram for the first time.

Simply Measured highlighted the findings of five brands using video on Instagram, showing mixed results. The data for the these companies reflected Instagram activity between May 25-June 25, with more photos typically posted than videos during that period, since the video feature didn't launch until June 20.

The inaugural video for Lululemon, which makes yoga-related clothing and gear, drew more than double the average of 5,785 likes per photo. As one of the showcase brands for the new service, Simply Measured indicated that Lululemon had advance time to shoot the 15-second clip in multiple locations to produce a polished, well-conceived spot in time for the launch, leading to its highest engagement spike in a month.

A recent post by digital agency 360i on the Instagram video launch suggested that marketers stick with both formats. “Brands are advised to maintain a balance of both still images and videos, as photos will likely continue to be a huge part of Instagram, but videos will be useful when capturing longer-form story moments,” wrote 360i's Tatiana Urriaga.

Overall engagement with Instagram video dwarfed that on Vine. Because nearly all Vine sharing activity takes place through Twitter, Simply Measured compared Vine retweets and replies on Twitter with likes and comments on Instagram. The former amounted to only 225 brand interactions versus the nearly 190,000 on Instagram (not including Facebook) from June 20 to June 26.

That gulf partly reflects Instagram’s far larger user base -- 130 million compared to 13 million on Vine. There are also only half as many Interbrand 100 companies on Vine as the 14 already using Instagram video. (Only MTV and Cisco were on both.) Still, it doesn’t bode well for Vine in serving as a marketing vehicle for brands until its audience comes closer to matching that of Instagram.

Vine has also hinted it will roll out new features itself in the coming weeks. As it is, Instagram offers advantages in more advanced editing capability, a selection of 13 filters, and image stabilization that help brands deliver more professional looking videos.