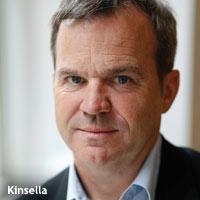 Kinsella, former North American CEO at Publicis Groupe’s Digitas, replaces Antony Young, who is taking on a new role at the organization.

The switch was made by Nick Emery, a 16-year Mindshare veteran who was named global CEO in January of 2012. Young was hired two years ago by Emery’s predecessor, Dominic Proctor, who was promoted to GroupM president when Emery moved into the top spot at Mindshare.

“Our challenge as a business is to realize media's potential to be our client's lead business partner,” stated Emery. “Everything begins and ends in media, and Colin's leadership will ensure that Mindshare is a business partner above and beyond the conventional.”

Kinsella is the second senior Digitas executive that Mindshare has tapped in two months. In May, the shop lured away Jordan Bitterman to become North American chief strategy officer. At the time Emery, Mindshare’s former global CSO, described Bitterman as a “rare and exceptional talent.”

According to the agency, Young will remain with Mindshare in a role that focuses on global business projects and development. Both Kinsella and Young will report to Emery.

Kinsella was NA CEO at Digitas from October 2011 until March of this year, when he was replaced by Tony Weisman in a management reshuffling orchestrated by Luke Taylor, global CEO of the merged DigitasLBi operation.

Previously, Kinsella served as global chief innovation officer for Razorfish, after working as president of the agency’s Western region. Prior to joining Razorfish in 2004, Kinsella led creative, strategy and business-to-business efforts at QuinStreet, a startup specializing in online marketing and technology, which he joined after working for 14 years in a range of management roles at Foote Cone & Belding in San Francisco, London and Chicago.