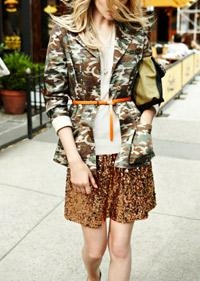 With the calendar’s flip to August, retailers are turning up the heat on summer back-to-school events. Stores are pulling out all the stops -- 50% off sales, BOGO, new merchandise and sweepstakes -- in their efforts to win a larger share of this year’s $72.5 billion prize.

Macy’s, which last year kicked off a concerted effort to win back department store-leery Millennials, is stepping up its new merchandise pace, and says it is expanding 20 of its existing clothing brands aimed at Gen Y. It’s also introducing two new ones this month: Maison Jules and QMack, each launching in approximately 150 stores this August. (Macy’s Millennial brands are positioned either in its Mstylelab department -- courting those who are 13 to 22 -- or Impulse -- targeting those who are 19 to 30.)

The company says the new private labels continue to “deliver on our promise of newness and excitement. Both collections are unique, contemporary and affordable.”

Affordable is the operative word, and Macy's is advertising savings of up to 50% off on its home page, as stores hone in on this season's exceedingly value-driven parent.

Kohl’s, in addition to its BTS shopping apps and 50% off dorm furnishings, is integrating sweepstakes into its BTS campaign, handing out game pieces for every $30 a customer spends in stores or online, each with the chance to win one of thousands of prizes, such as Keurig mini-coffeemakers, Shutterfly prints, movie passes and iTunes cards.

And beleaguered JCPenney is offering savings of 25% to those who spend $200 or more.

So far, discounters have the edge, according to YouGov BrandIndex’s Back To School Retail Monitor. In the last four weeks, it says, parents say “Target, Walmart, and Old Navy have provided the best combination of purchase consideration and value perception.”

Kohl's, Staples, Office Depot, and Costco do just as well in terms of value perception, but slightly below them in purchase consideration, followed by JCPenney and Sears.