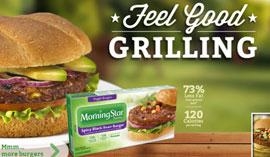 Vegetarians and vegans aren't the only people eating "meat alternatives" like tofu, tempeh and seitan.

In fact, while just 7% of Americans identify themselves as vegetarians, 36% now say that they've eaten such meat alternatives, according to new research from Mintel.

Sales of meat alternatives in traditional channels, natural supermarkets and specialty supermarkets grew by 8% between 2010 and 2012, to $553 million. Conventional channels account for 89% of category sales, and Kellogg's MorningStar Farms commands 61% of those sales.

While products in this category were at one time viewed more or less exclusively as meat substitutes, "the expansion of formats and flavors has allowed the category to grow beyond one of necessity to become one of desire," says Bloom. "Product manufacturers and marketers have a chance to come out from behind the veil of 'substitute' and stake a claim as a food option that stands on its own.”

Nearly a third (31%) of users say that they enjoy the taste of these foods. However, health perception plays the most important role: A third of consumers indicate using these products because they're healthy (and 51% of users believe these foods are healthier than real meat).

In addition, some 31% are trying to reduce their meat consumption--and this isn't just cholesterol-driven. Concerns about meat processing and ingredients, including genetically modified organisms (GMOs), are also driving adoption or experimentation.

Vegan claims on new products released in the meat alternative category surpassed vegetarian claims in 2011, to take the top spot. In addition, the “no animal ingredients” claim saw the strongest growth from 2008 to 2012 (up 200%). Both of these trends indicate that consumers are becoming more extreme in their dietary habits, says Mintel.

The other leading claim to see strong growth was "GMO free" (up 155%).

Given the importance of the health factor, alternative products that have a "clean" profile will be best-positioned to attract consumers' attention, the researchers note.

Sixty-seven percent of non-users indicate a preference for real meat; 34% say they don’t care for the taste of meat alternatives; and 20% don’t like the texture.