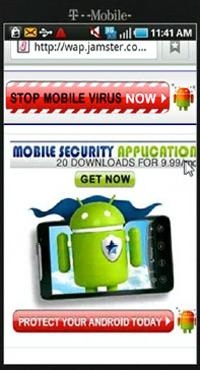 Jesta Digital has agreed to issue refunds to consumers and pay a $1.2 million penalty, to settle charges that it duped mobile users into downloading anti-virus software, the Federal Trade Commission said this week.

Jesta Digital, also known as Jamster, allegedly sent scareware messages to people while they were playing "Angry Birds" on their Android devices. Those messages, which used a graphic similar to the Android robot, misrepresented that viruses had been detected on users' devices, the FTC said in its complaint against the company.

People who clicked on the ads were taken to a screen where they could order Jamster's anti-virus software for $9.99 a month. But the FTC said in its complaint that the information about pricing was “in small print below the fold.”

Users who clicked on a subscribe button were then charged an extra monthly fee, which appeared on their mobile bills. The vast majority of those who subscribed and attempted to install the sofware were unable to do so, according to the FTC.

The FTC also alleged in its complaint that Jesta charged some consumers for ringtones (and other material), even when they never clicked on a subscribe command.

In addition to the $1.2 million fine, Jesta agreed to issue refunds to people who were billed for anti-virus software after receiving scareware messages. The company also promised that it won't bill people in the future without first receiving “express verifiable authorization” that they wish to make purchases.

The FTC on Thursday reiterated that its truth-in-advertising principles apply to mobile marketers. “Whether you’re selling Model Ts, poodle skirts, or the latest mobile service, false statements -- like Jamster’s phony malware warnings -- are illegal under the FTC Act,” the FTC wrote on its business center blog.

Earlier this year, the FTC updated its truth-in-advertising guides to make clear that marketers must clearly and conspicuously disclose all terms to consumers -- even when they are viewing ads on small mobile screens.