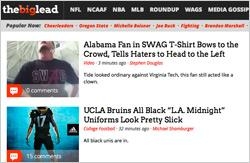 Both the print edition and Web site of USA Today received a major overhaul earlier this year, with a new graphic treatment for the newspaper and easier navigation on the site.

The revamp is now extending to some of the newspaper’s other digital properties. The latest site to get a makeover is The Big Lead, which mashes up sports news and commentary with pop culture, celebrity news and gossip.

The relaunch integrates responsive design to improve the interactive experience for readers across a number of devices and channels, including mobile and social.

According to USA Today, over half the traffic to thebiglead.com now comes from mobile, including smartphones and tablets, while 40% is referred from social media platforms. The redesign will also make The Big Lead more suitable for native advertising.

These moves come on the heels of rapid growth in both audience and engagement; the company claims unique visitors are up 112% while page views have almost doubled since July 2012. Page views on tablets are up 250% and page views on smartphones are up 320%. Over the same period, the average amount of time spent per visitor is up 47%.