Mazda Consumers Get Keys To Company 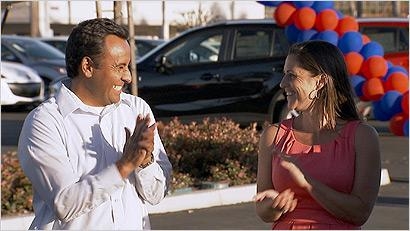 Mazda will be featured on a new show for the OprahWinfrey Network this week called the “The Customer is Always Right?”

It is the first time Mazda has participated in a documentary series. The show, set to air Sept. 12 at 10 p.m., is high-minded rather than a puff piece infomercial for Mazda's vehicles redo.

The concept of the show is to show how products -- in this case the next-generation CX-9 SUV -- get developed through consumer insight.

For the Mazda show, two consumers get the key to the company. One loves Mazda vehicles, while the other has little regard for the brand.

Robert Davis, SVP U.S. Operations, meets the two unsuspecting customers -- Tommy and Darla -- and asks them to spend a week at the company's design and product development shop in Irvine, Calif.

Davis tells Marketing Daily that during the week the two go through something of a guided exploration of the Mazda’s design and product development shops, with the two getting some say in changes for the next-generation CX-9 based on improvements they would like to see that address their lifestyles.

When it's over, the company vets their suggestions via focus group. If the group gives a thumbs-up, the two get a cash prize and their influence on the final design of the vehicle.

Davis says the show gives viewers an inside look at how a vehicle is brought to market.

"We are interested in trying to make an auto connection in a program where in the past it was all consumer packaged goods or service items like restaurants," he says, adding that the show's producers approached Mazda because they wanted to make an association between consumers and products whose market development requires much more lead time and compromise between design and engineering.

"The timing was good because we were were working on the next-generation CX-9 and that's what the show focused on," he says.

The two had "true ownership of changes in how things look and how they function in terms of real-time activity" around everyday use and kids. Mazda has also been working to promote its SkyActiv branded fuel-efficiency technology.

A new study by Millward Brown suggests that the branded suite of powertrain features is getting traction, based on consumer surveys and digital behavior. The firm says one in five general market respondents (versus auto shoppers) felt that they were aware of SkyActiv enough to associate the name with any automotive brand. The firm notes that Mazda’s U.S. 2013 year-to-date sales market share through July was 1.9%, so 17.8% is a "good preliminary result."

Thirty-one percent of respondents associated SkyActiv with Mazda. Sixty-nine percent therefore incorrectly attributed SkyActiv to another brand. But six of the brands are near luxury/luxury brands, "suggesting SkyActiv may have an upmarket connotation."