Just when you thought few, if any, forms of advertising could really make a direct difference in people’s lives, here comes one of the most inventive forms of outdoor advertising ever executed, merging the human need for water with a billboard placement in the desert region outside Lima, Peru. 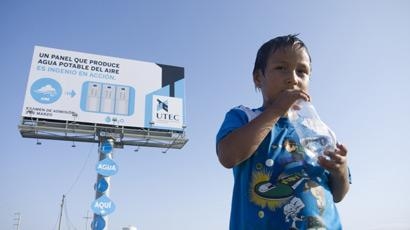 Lima usually doesn’t get much rainfall, but at the same time, humidity levels approach as high as 98%.  That means there’s plenty of water in the air, just not enough to supply the people of Lima on the ground.  To help tackle the problem, MAYO-DRAFT FCB partnered with The University of Engineering & Technology (UTEC) in Lima to create an outdoor board using technology to actually grab moisture from the desert air and then convert it into filtered drinking water that’s distributed at the base of the billboard.

The billboard is also designed to provide an example of the University’s ingenuity, encouraging prospective students to apply to the school to study engineering.

Erected along Peru’s Pan-American Highway, the billboard uses capture, conversion and purification mechanisms (including an air filter, condenser, carbon filter and cold tank). The electric system takes moisture from the humid air by means of reverse osmosis and delivers purified drinking water through small ducts at the foot of the billboard, down to a tap at the base of the structure.

The billboard is reportedly able to produce over 25 gallons of water every day for the locals, or for travelers who stop for refreshment. Since its installation in December 2012, it has already produced an amazing 2,500 gallons of filtered water right out of thin air. 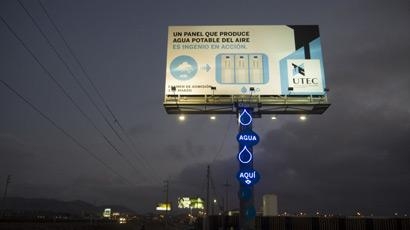 It’s always more interesting when brand messages turn up in contexts where the media placement itself is a critical component of the message.  In this case, the media placement resides in a context that actually IS the problem the advertiser (UTEC) is trying to solve – and does.  In this way, it really is a product demo like no other.   The case video here tells the complete story.

It’s no secret that when creativity, technology and smart media planning all come together, the results can be very powerful -- even sustainable. Everyone found this creative very refreshing at the Cannes Outdoor Lions, because it’s advertising that makes a real difference.