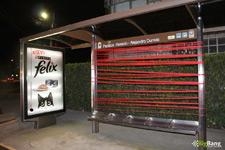 To launch the debut of Felix, a cat food brand, in Mexico City, Purina created life-sized cat’s cradles in five bus shelters throughout the city. Would this much yarn put a smile on Grumpy Cat’s face? Probably not, but it gave me one, as I fondly recalled playing Cat’s Cradle as a kid.

Big Bang Global, a Mexico City-based agency, came up with the creative concept, which took two weeks to conceptualize and create.

“Purina asked us to create a funny, high-impact campaign in bus shelters for their new product called Félix,” said Ricardo Rojas, CEO of Big Bang Global. “We developed a concept that could engage cat lovers and pedestrians in high-traffic areas. The idea originated from the common fact that cats love to play with balls of yarn and it would be fun and original to replicate the idea in large scale, with similar ‘yarn-like’ material surrounding the bus shelter.”

The yarn spans the length of the bench inside the bus shelter, 7ft x 6ft. The campaign ran from September 3 through October 7 and, not surprisingly, was a hit with passersby who wanted to take goofy pictures while playing with the yarn.

“Purina loved it,” continued Rojas. “This was the first time they used special production for their installations. Consumers fully engaged with the installation by touching the yarn and taking funny pictures with it.”