Simon Cowell And 'The X Factor' Give It Another Go 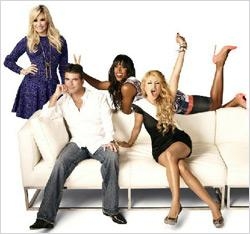 “The X Factor” returns for a third season tonight on Fox. One might ask why. It wouldn't be an unreasonable question.

I’m a big fan of the reality competition genre, and I have been particularly supportive of Fox's “American Idol” since its humble start as a fill-in summer series in 2002. I’ll admit “Idol” has lost some steam in recent years, but like ABC’s “Dancing with the Stars” and NBC’s “The Voice” and “America’s Got Talent,” it continues to impress me as a live, contemporary variety series. There is still great enjoyment to be had when the contestants on these shows step up and deliver.

But “The X Factor” is something else entirely. From the beginning, the American adaptation of this hit international franchise has attempted to be the biggest and best of its genre. But the end result has been a series of little entertainment value -- a show that managed to be simultaneously overproduced and underwhelming as it rolled along.

On stage and in masterfully produced video introductions, each and every contestant on the “X Factor” live shows has been showcased in the manner of a superstar rather than someone of unproven talent striving for recognition and a shot at something better in life. During the first two seasons, a few contestants -- especially the younger ones -- seemed to buy into the excitement of this instant faux-celebrity and began acting in ways that were, in the kindest possible term, obnoxious.

This isn’t the experience offered over the years by “American Idol,” which has been modest and wholesome by comparison. (In fact, I would argue that many of the ratings issues that “Idol” has suffered during the last few seasons have had more to do with certain aspects of it being over-produced in the manner of “X Factor.” Go back and watch shows from the first few seasons of “Idol” and you’ll be struck by the relative intimacy and easy emotional connectivity of it all. Less was definitely more.)

The build-up to Season One of “X Factor” was a media thrill ride. Simon Cowell had broken away from “Idol” and was set to headline a glitzy American adaptation of yet another show from his stable of international successes. Fox’s problematic fall season -- with so many interruptions for baseball that it is near impossible for a new scripted series to catch on or for ongoing serialized shows to sustain true momentum -- would finally have an exciting new show at its center that could survive and thrive regardless of such preemptions. Furthermore, “X Factor” would potentially run right up to Christmas week, ostensibly building toward a giant annual feel-good finale that the entire family could enjoy while gearing up for the holidays.

But “X Factor” arrived with a resounding thud; only the heavy lifting involved in virtually every aspect of the production and promotion of this show kept it from becoming a desultory fail -- and it’s been downhill ever since. Two hosts and five judges have come and gone in two years' time, leaving the show without much of an identity. Cowell hasn’t been able to rip into all of the contestants with his signature sharp wit because some of them have been on his teams and he has wanted to win the competition. Most telling of all, there hasn’t been a winner -- or even a contestant -- from the first two seasons of “X Factor” who has become a red-hot recording artist or a household name. (This is also true of “The Voice.” How does “Idol” do it?)

I would also argue that by filling its fall season with two weekly installments of “X Factor,” Fox has somehow diminished what had been outsized annual enthusiasm and anticipation for the arrival of “Idol” in January. And from where I sit, “Idol” is still much more important to Fox than “X Factor” has ever been or ever will be. In a best case scenario, “X Factor” should feed viewers into “Idol,” but that hasn’t been the case.

I would like nothing better than for “The X Factor” to be every bit as enjoyable as “American Idol” and “The Voice” at their best. And I understand, as noted yesterday by MediaPost’s own Wayne Friedman, that it has a certain value to Fox. But at this point I’m not sure how the show can get better -- or begin to gain rather than continue to lose viewers. Calming the whole thing down might be a good place to start, but I doubt that is going to happen.