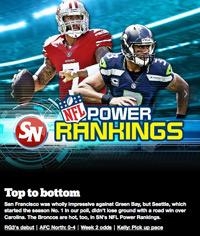 With the National Football League’s regular season upon us, football fans have a new source to turn to for game highlights, thanks to an agreement between the NFL and Sporting News Media, giving the latter access to NFL content for its SN ePlayer video-on-demand platform.

In addition to the regular season highlights, the deal also gives Sporting News access to related NFL video content year-round. The SN ePlayer is compatible with a variety of devices, including tablets.

This is just the latest in a series of moves by Sporting News to beef up its NFL content and distribution.

In July, the company announced that it had hired former NFL player Ross Tucker as its lead pro football columnist and video analyst, providing expert commentary, insights, and analysis across multiple platforms -- including a weekly interactive featured column, which allows fans to take part in the discussion through Google+ Hangouts.

Tucker will also create a series of Web videos to provide color commentary around his weekly column. Another video feature, “Hot Reads” with Troy Aikman, is a weekly look at key games and interesting match-ups from the perspective of the Hall of Fame quarterback.