Aegis’ Carat unit updated its global ad outlook this morning, downgrading the ad industry’s growth rate to 3.0% in 2013, from a forecast it released in March that projected a 3.7% expansion in global ad spending.

At the same time, Carat took half a percentage point off its estimates for ad industry expansion in 2014, dropping its new 2014 growth estimate to 4.5%, down from the 5.0% it predicted in March.

Carat said the downward revision is due to “a slower upturn of the global economy,” adding that it still predicts a “market recovery” in all regions in 2014.

“After two consecutive years of market decline, Western Europe is predicted to experience a slow and gradual recovery even in markets registering double digit decline in 2013, such as Greece and Portugal,” the new forecast notes, adding, “Confidence in the post-Olympics UK economy is reflected in the country's strong performance and resulting in an increase of +3.6% year-on-year growth in 2013, rising to a predicted +5.0% in 2014.”

By medium, Carat not surprisingly predicts “digital” ad spending will continue to outpace all other media, projecting a 15.6% expansion in 2013, which it noted is more than 10% greater than any other medium and is a “trend that will continue as emerging markets such as Brazil adopt a more digital approach.

“Digital spend predictions continues to meet expectations of taking one out of every five dollars from the advertising wallet in 2014,” the agency said, looking forward to next year. 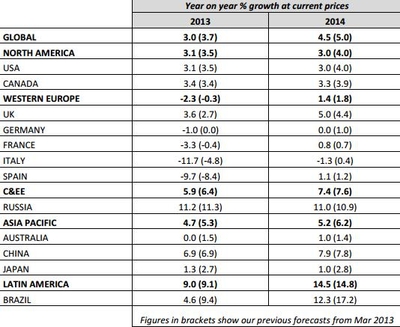 Methodology: Carat's advertising expenditure forecasts are compiled from data which is collated from around the Carat network and based on Carat's local market expertise. We use a bottom-up approach, with forecasts provided for 57 markets covering the Americas, EMEA, Asia Pacific and Rest of World by medium - Television, Newspapers, Magazines, Radio, Cinema, Out-of-Home and Digital Media. The advertising spend figures are provided net of negotiated discounts and with agency commission deducted, in current prices and in local currency. For global and regional figures we convert the figures centrally into USD with the average exchange rate. The forecasts are produced bi-annually with actual figures for the previous year and latest forecasts for the current and following year.