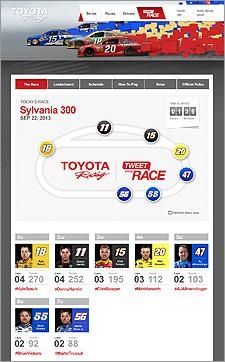 Toyota Racing is teaming up with NASCAR for a promotion that will allow fans to participate in a virtual race via Twitter in connection with the Chase for the Sprint Cup.

Kicking off during this Sunday’s race at Chicagoland Speedway, the “Tweet Race” encourages fans to tweet a hashtag of their favorite Toyota driver’s name along with the hashtag #TRTR during each of the final 10 races that make up the Chase and determine the 2013 NASCAR champion. The driver with the most tweets will be the Tweet Race winner that week.

People will be able to track the progress of their favorite driver during each Sunday race throughout the Chase series through a virtual track featured at toyotaracing.com/tweetrace. Three participants will be selected to win a weekly prize. Two will come from the pool of the winning driver’s supporters, and the third will be a wild card, awarded to the most creative tweet of the week.

The Tweet Race is similar to a promo that NASCAR ran earlier this summer with Sprint, in which fans tweeted their favorite driver’s number with the hashtag #Sprint 60 as many times as possible during the last 30 laps of the Coke Zero 400. The driver with the most tweets won a mini trophy and a $10,000 check toward their favorite charity.

“The Tweet Race is a way for fans to virtually participate in the Chase for the championship, as well as support their favorite Camry driver,” stated Keith Dahl, Toyota National Motorsports and engagement marketing manager.

NASCAR last year became the first sports league to forge a partnership with Twitter that gives fans a live Twitter experience. When fans click on #NASCAR, search for #NASCAR on Twitter or visit twitter.com/#NASCAR, they can see a Twitter platform scrolling the most relevant tweets from drivers, families, teams, commentators, and other racing fans and personalities.