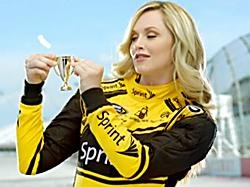 Here's how it worked: Fans tweeted their favorite driver's car number along with the hashtag #Sprint60. Each tweet in support of a specific driver increased that driver's speed around the virtual track. Viewers watched the progress of the user-powered race live on the TV.

“NASCAR racing is legendary for separating kids from grownup drivers”, stated Lars Lauritzsen, never.no's CEO. “The Sprint 60 separated kids from grownups in the social TV technology field. It’s a prime example of what our Sync product is all about: 1st/2nd screen synchronicity, real-time broadcast graphics rendering, and individual viewer dialogue."

Here is never.no's description from the press release of how their Sync platform powered the race: "Never.no's Social TV platform was used to harvest the incoming #Sprint60 hashtags and calculate the speed for each driver. The real-time velocity data was fed directly into a Chyron graphics engine and powered the on-screen race for the duration of the voting. The top five drivers at any time, voted by fans in real-time, appeared on TV. Icons of the top five appeared on a virtual race track and their position in the race was based on the continuously incoming votes."

The eventual winner of the Spring 60 Unlimited race (the Twitter race, not the real one) was Dale Earnhardt Jr. He received a trophy and $10,000 donation to a charity of his choice.