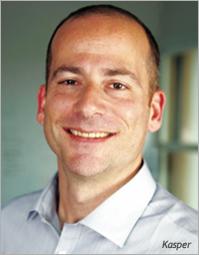 Adam Kasper knows from backbreaking work. Hoping to earn a few bucks during his college summers, he toiled in a series of restaurants. While this didn’t make him unique among almost-adults of that age, it turned out Kasper was a natural. And so it was that after graduation, he went to work in the business full-time, eventually moving to Washington, d.c., to open a touted new restaurant and serve as its chef.

“It was seven days a week, 12 to 16 hours per day,” he recalls years later. “I’m not saying that doing what I do now is easy, because the pressure and travel can be intense. But it beats having your hands blistered and cut every day.”

The omma Online All-Star’s unlikely career arc — from menus to media — suggests an individual comfortable with seismic change and eager to embrace everything that comes with it. Indeed, once he made the move into the media/advertising business, Kasper charted an unusual path to his current role as chief media officer at Havas Media, North America. He started out as a radio buyer (“way back when radio was cool,” he deadpans) before transitioning over to national TV and, later, media planning.

“It gave me a well-rounded base across all media, which has been really helpful,” Kasper says. “Planning approaches are similar across channels. It’s when you get into the specifics of execution that they become quite different.”

Kasper learned this first-hand when he made a conscious choice to shift exclusively into the digital domain upon arriving at Havas in 2005. His motivations weren’t extraordinary — like many others, he believed that digital was the future of communications — but his willingness to jump into the deep end of the pool certainly was different. Kasper proceeded to spend the months that followed at conference after conference, inhaling anything and everything that would ease the transition.

“The biggest challenges for anyone who puts all his eggs in that one basket, so to speak, are the technical ones,” Kasper recalls. “I had to start at the beginning of learning how, functionally, everything works — tracking, trafficking, all that fun stuff we talk about in digital all day.”

Upon arriving at Havas, Kasper told anyone who would listen that he “didn’t want to dabble” in digital. Eight years later, his understanding of the space and of the best ways to work in, up and around it landed him at the helm of the Havas Media rebranding process, which saw the company merge two entities into one and restructure from proverbial head to toe.

“We literally changed the way we work on a daily basis,” he reports, noting that everything the agency creates and procures for clients is now housed in a single division of the company. “We’re the fifth- or sixth-largest of the holding companies; some of our competitors are much bigger. But by consolidating and streamlining our products and buying and negotiations, we have the marketplace strength and leverage to compete with bigger companies. I don’t think buying in this day and age is all about scale.”

Kasper admits the restructuring progress was complicated and difficult. Asked to list the frustrations with his current role, he prefaces his answer with “I should be careful answering this one” and a nervous cackle. After stressing that he loves his job and remains incredibly proud to work with his current slate of Havas peers and clients, he responds: “Sometimes the agency model has challenges, in being able to do work the right way and put the staff and resources against it, in a world where numbers and costs are being crunched on a daily basis. Finding the balance between being able to create great solutions for clients and being able to do it while running a profitable company, that’s a challenge.”

But it’s one that he handles with aplomb, which comes as no surprise to the people who know him best. To a person, they laud his intellect, decency and unflappability. “Adam is so approachable and easygoing,” says Debi Kleiman, president of mitx, a New England-based Internet business and marketing association. “It’s really part of his secret sauce, though. He’s super-sharp, very tuned-in and analytical, but he’s also got this great, casual, collaborative personality that makes it so fun to work with him.”

Given such an unusual combination of talent and temperament, it shouldn’t come as a surprise that Kasper points to an entity slightly outside his direct professional sphere as the one he admires most.

“The New York Times has done such a tremendous job with their digital product. So many news organizations have succumbed to a kind of trendy way of reporting news — whether it’s through lists or small snippets of information, or a focus on culture and not as much of one on what’s really going on in the world,” he says. “[The Times] has created something that works really well in the digital space but doesn’t compromise their integrity. That’s what we’re all shooting for, right?”