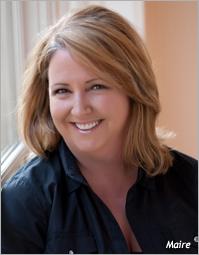 Many of the industry’s top strategists honed their skills at a consultancy, or by serving a long apprenticeship under a Yoda-grade mentor at a corporate monolith. Rockfish’s Dawn Maire, however, started her journey into the worlds of digital, brand and retail strategy in an unlikely marketing/media segment: telemarketing.

Fresh out of college, where she majored in psychology (“It’s an ideal backdrop for what marketers do”) Maire went to work for DialAmerica Marketing. By age 22, she’d ascended into management and was charged with running a handful of call centers. As unrelated as that role might seem to her current charge as Rockfish’s chief strategy officer and ceo of its rich media ad platform Media Multiplyer, Maire believes it provided her with invaluable customer insight.

“There was so much time spent on how to talk to customers, how to position products so they’re most desirable,” she says. “If you can figure out a way to sell something over the phone, the rest is easy.”

Maire further expanded her knowledge base during a stint at Omnicom’s Rapp Collins Worldwide (now known as rapp). As chief retail officer, she worked with A-list brands like Macy’s and Best Buy, focusing on adding luster to the customer experience. “My love has always been retail. I love everything about learning what it takes to drive somebody to a store,” she says.

Longtime friends and clients affirm the intensity of that enthusiasm. “She has a great ability to dig into a business problem, bring together a team to develop a creative solution and make it happen,” says Cindy Davis, executive vice president-global customer insights and analytics at Wal-Mart. “No matter how tough the challenge, you’ll just hear her say, ‘It’s all good.’ I gave her a wooden carving of that signature phrase for her office. It is a symbol of her tenacious, can-do and collaborative leadership style.”

When she arrived at Rockfish in 2010, Maire immediately set about building Rockfish’s strategy operation from scratch, leaning on what she’d learned in her past professional lives as well as what she’d seen — and failed to see — in other strategy groups she had encountered. She wanted  the agency’s strategy offering to be equally comprehensive and practical.

“Other agencies were putting together all sorts of cool applications, but they were mostly what I call ‘digital bling’: really cool, but  no real business reason for them,” she says. “Right away I said anything we’d do that wasn’t relevant and actionable wouldn’t go to the client.”

Such focus on business utility fueled the development of Media Multiplyer, a tool to help brands get the most out of their rich-media campaigns that has been adopted by Kimberly-Clark and others. When Maire and her Rockfish peers looked at the online advertising space, they saw the digital equivalent of the Wild West. Rather than work within existing frameworks, they set off to create a solution of their own.

“For several years, digital and social were the great unknowns. People were investing dollars without having any idea where they’d go, really, but now they’re less inclined to do something just because they see everybody else doing it,” Maire explains. Media Multiplyer was designed with roi in mind. “There’s a hunger for accountability. cfos are saying, ‘Okay, what are we going to get back for this? What’s our return?’ We need to be able to prove that a campaign drives visitors to an Amazon page.”

Maire considers such challenges central to the appeal of her current gig. Indeed, asked to list the favorite parts of her job, she gives a unique response:  “I like answering questions that haven’t been answered yet.” For many of the problems Rockfish’s strategy group is asked to tackle, there isn’t an accepted body of work to turn to by way of example. There aren’t best practices or case studies.

“We’ll think, ‘How are we going to monetize a mobile app?’,” Maire says. “It’s like, ‘Okay, let’s look at people already doing it… Oh, wait, there aren’t any.’ Running up against that is what gets me going.”

Perhaps that’s why, in addition to long-established Nike and Nordstrom, she points to Jackthreads and Zoës Kitchen as examples of forward-thinking brands. “You can learn from smaller players who are not beholden to a non-digital heritage,” she says. “The absence of a traditional approach is an accelerant that can help brands capture share and revenue very quickly.”

Maire may covet the challenge of working with open-minded, preconception-free peers and brands, but she’s thrilled with her current post at Rockfish and has no plans to leave (well, unless a can’t-miss opportunity to run a lunch-catering business opens up — check out her entertaining food blog at foodieworthy.blogspot.com). “I should be a little more ambitious, but I’ll do this as long as they’ll keep me around. The ability to play in this environment every day is incredible,” she says.

Then, with a throaty laugh, she adds, “Hashtag #noregrets.”

1 comment about "Online All Star: Dawn Maire".
Check to receive email when comments are posted.
Next story loading