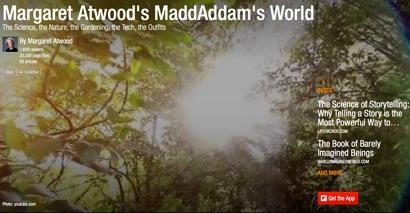 Random House is getting into the digital magazine business, in partnership with Flipboard, in hopes of boosting book sales. Their first products include digital magazines curated by Margaret Atwood, promoting her new novel "MaddAddam," and Westeros.org, exploring the fictional world created by George R. R. Martin in his "Song of Fire and Ice" fantasy novels, which began with "Game of Thrones."

The magazine curated by Atwood, MaddAddam’s World, delves into the dystopian near-future world created by Atwood over the course of her science fiction-satire "MaddAddam" trilogy, which includes "Oryx and Crake," "The Year of the Flood" and now "MaddAddam." Fittingly, the magazine also delivers actual news about real cutting-edge scientific developments, often trending toward the creepy, that seem to prefigure the technology-aided apocalypse imagined in the trilogy.

The reader is treated to a similarly immersive experience in “The World of Fire and Ice,” the Flipboard magazine curated by Elio Miguel Garcia Jr., an illustrator who was commissioned to create wall-sized maps of Westeros, the elaborately imagined and infinitely detailed world set out in Martin’s "Song of Fire" and "Ice" series.

The magazine includes "Thrones"-related content from sources like Wired.com, Rollingstone.com, Slate.com, and of course Westeros.org and georgerrmartin.com. The magazine also promotes Martin’s new works outside the "Game of Thrones" series, as well as his projects in comics, gaming, and collectibles.

Random House and Flipboard are promoting the new magazines with inclusion on lists of Flipboard editors’ top picks, new and noteworthy content, and the Inside Flipboard blog, as well as via social media.