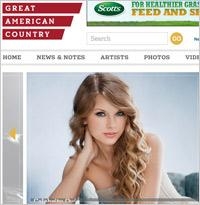 No longer about just country music, cable channel GAC is going by its longer moniker -- Great American Country -- to reflect its broader offerings and appeal.

The new brand identity, which launches Oct. 1, is intended to express the channel's offerings that have expanded from the channel’s beginnings as a country music network, Leitman says. In recent months, the channel has launched programs such as “Farm Kings” (which chronicles a farming family in Pennsylvania) and “Celebrity Motorhomes” (which showcases the mobile homes of celebrities), expanding beyond its former country music roots.

“What we’re moving to is ‘country’ as a sense of place,” Leitman says. “We’re about the entire country from coast to coast.”

To augment the new designation, the network is launching a redesigned logo that takes its cue from the American flag, featuring three red stripes against a white background.

“With a network our size, the more visual cues, the better,” Leitman says. “There’s no mistake when you see [the logo], what we stand for.”