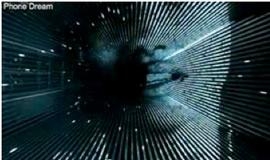 Most in-cinema advertising features lavishly produced trailer-like spots that attempt to match the production values and epic sound and picture quality of the movies they precede. As movie trailers have become louder, attempting to cram as many 10-frame shots from the feature into them as possible, the corresponding ads have followed suit – including attempts to drive tune-in to unscripted cable reality shows that end up appearing more like trailer spoofs than ads themselves.

Enter SPRINT’s “No Talking or Texting during the Movie” campaign – a parallel reality of 3D sequences delivered to your phone when you power up after your movie. As a means of demonstrating the features and benefits of Sprint’s cellular phones, a futuristic trailer asks,  “When you shut your phone off, does it dream?” When your movie ends, those who texted to 60602 receive a message asking them to opt-in via Facebook. After opting-in, movie-goers get a 15-second video clip capturing what their device has been “dreaming” while it was ”sleeping.”

The customized clip is developed over a two-hour period, tapping into users’ publicly available information on Facebook, including photos and specified interests, to create their own mini video. People can then share the dream clip with others via Facebook, Twitter and other social networks.

"Our mission was to create something that would take full advantage of the power and scale of a cinematic experience," said Michael Boychuk, senior vice president/executive creative director, Leo Burnett, in the campaign announcement.

To get a closer look at how each 3D dream sequence was made, watch here.

Sprint has gone beyond the mobile site/app dilemma to provide a rich-media mobile experience that turns a turnoff into a real turn-on.

ad campaign, mobile
1 comment about "Sprint Cinema Campaign Is A Complete Turnoff".
Check to receive email when comments are posted.
Next story loading