ESPN, Facebook And A Day Of Mobile Tipping Points 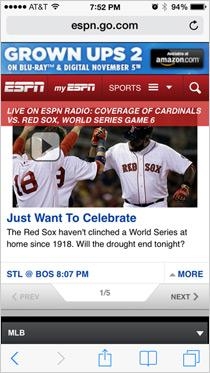 I am not sure that takes and metrics demonstrating the staggering velocity of mobile migration are as, well, staggering as they were only a year ago. We get it. We never liked the desktop all that much anyway. Give us a chance to hold the Internet in our hands (better still, use it in prettier app formats) and we will angage, engage, engage.

Still, there is something momentous when a number of tipping points arrive all at once. There is, of course, Facebook’s announcement that 49% of ad revenues now come from the mobile side. Was it only 18 months or so ago when we were wringing our hands (I know I did) over the blind spot in IPO enthusiasm over Zuckerberg’s dorm project? There was no apparent mobile ad strategy. Well, they got one about as quickly as they needed to. The mobile daily users at Facebook are now at 507 million -- well over half now of the 728 million daily users to FB overall. MOAs from mobile are now up to a (here I go) staggering 874 million.

The flip side of that is that for the first time Facebook saw a real decline in desktop use. Daily active users on the traditional Web were down, CFO David Ebersman said on the conference call (per Business Insider live blog). And the purported teen flight from Facebook has some basis in reality. Daily use among teens did fall. I wish they had said whether it was being taken up by increased Instagram use, which held steady at about 150 million monthly users.

How ironic and fitting if the “social network” born in a college dorm and focused on college life becomes stale to teens and is embraced by their parents and grandparents who are just staying in touch.

Another tipping point is reached at ESPN this past month. This longtime cross-screen pioneer began mentioning over a year ago that traffic to its mobile properties Sunday football games often rivaled traffic from the desktop. In sports especially, the second screen has been invaluable on a number of levels. Handsets not only allow surfing while watching, but they allow a room full of fans to check on other games without getting bowls of guacamole tossed at them for hijacking the remote.

But in September, ESPN saw for the first time more unique visitors (47.4 million) to its mobile properties than to ESPN.com (46.1 million). And more than a third of ESPN users (36%) were accessing the brand exclusively on mobile. Interestingly, for all of the momentum and hype around mobile video, streaming media is still overwhelmingly desktop-based for the brand --with only 16% of the 326.4 million video clips viewed in September going to devices, but 77% on desktop. An interesting up-and-comer in the video category is the connected TV, which was responsible for 6% of videos viewed. WatchESPN is on Apple TV now, along with other OTT boxes.

Finally, we leave you with another metrics milestone from another one of the most successful companies to make the mobile transition. MLB.com announced that its At Bat app will end this baseball season having been started over 1 billion times since the app first appeared in the iOS store in July 2009. It was one of the first big hits in the app ecosystem, one of the first to stream live video, and consistently among the top-grossing apps of all time. The company says that 60% of At Bat users open the app every day.