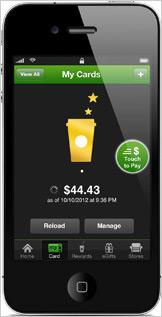 When it comes to mobile innovation, Starbucks has long been held as the gold standard for other retailers to follow. What that means is Starbucks has created a mobile version of its loyalty card that people can use to make in-store payments, as well as track their progress toward rewards, find nearby stores, and get content like free song downloads.

Plus, customers actually use it. During the company’s earnings conference call Wednesday, Starbucks executives highlighted the latest figures for mobile usage: 11% of in-store transaction in the U.S. and Canada are paid for with a mobile device. That translates to an average of 4 million mobile transactions a week, and more than 8 million customers using its mobile app.

“Through them, we are communicating with and delivering innovation to our customers in a way that no other retailer can. On the horizon, our enhancement to mobile apps includes mobile ordering and digital tipping, which are on its way,” stated Starbucks CEO Howard Schultz during the call. He and other company executives haven’t been shy about promoting the company’s mobile initiatives.

A year ago, Shultz was also discussing the coming of digital tipping and mobile ordering. Since he mentioned those mobile services again Wednesday as coming attractions, it suggests there hasn't been much progress on that front. La Boulange, the, chain of bakeries Starbucks acquired last year, has been offering mobile ordering since last year through its app.

The company's 4 million mobile transactions a week is twice the number a year ago, but still a small share of total transactions in North America, at 11%. In one of the most advanced mobile markets globally, nine out of 10 purchases are still made with a credit card, cash or Starbucks physical loyalty card. And that's almost three years after Starbucks rolled out mobile payments nationally in the U.S.

The proportion of mobile payments is likely to continuing growing each year, but the fact Starbucks is touting that 11% of transactions came from mobile says more about the failure of mobile payments to catch on widely than the company’s technological or business prowess. There simply aren’t many stores where customers can pay with a retailer’s own app at point-of-sale.

Whether paying by app even is more convenient than pulling out plastic cards, even at Starbucks, is questionable. For the consumer, the main value in Starbucks' app comes from the digital features, such as the ability to easily review the card balance and check the status toward the next free order--with the juvenile satisfaction of watching those gold “rewards” stars tumble into a virtual cup. If you’re looking for coffee in an unfamiliar neighborhood, the apps locator feature comes in handy.

In addition, Starbucks much-publicized partnership with mobile payments service Square last year hasn’t shown much promise. A report by Fast Company earlier this year found that paying at Starbucks using the Square Wallet app proved difficult, if not impossible, at many of the stores tested.

A year ago, Schultz was talking up the new deal with Square during the earnings call. Yesterday, he didn’t even mention the partnernship or Square in his comments on mobile activities. It was also revealed Wednesday that Shultz had resigned from the Square board 15 months after joining the hot startup. A Starbucks spokesperson said he only planned to serve on the board for a year.