Nielsen Gets A 'Toehold' On Google, Begins Tagging Campaigns On YouTube

For one, it represents a much bigger win for the measurement company than it does for Google or its ad partners.

“It is likely an incremental negative for comScore, as well as Tremor Video, YuMe and other owners of online video properties,” Wieser wrote. “It is also a slight positive for Facebook, as it deepens the importance of the data they possess in online advertising.”

Whether comScore's competing validated campaign essential (vCE) tags -- which are already allowed on YouTube -- qualify as a widely accepted measurement model is debatable. comScore co-founder and Executive Chairman Gian Fulgoni played down Google’s use of the Nielsen’s OCR tags as nothing more than a “test.” At best, Fulgoni said, it gives the TV ratings giant a “toehold” in the online video measurement space, not a position of dominance.

According to comScore’s analysis of the online video marketplace, the percentage of online video ads utilizing comScore’s tags has grown to about 75% in the U.S. and 82% worldwide. Fulgoni said comScore’s tags have been running on YouTube for about “six to nine months,” and added that there’s no reason to believe marketers and agencies would shift to Nielsen simply because Google now allows its tags.

Colin Gillis, senior technology analyst and director of research at BGC Partners, said he wasn’t surprised by Google's decision. On the contrary, he called its embrace of OCR data “just another step in [Google’s] march to capture TV dollars … the next big pool of ad dollars.”

Fulgoni added that there are a number of other “drivers of choice” that determine which video measurement service customers will utilize, and he trumpeted some of comScore’s strengths, including the fact that it currently is the “only one out there with a multiplatform audience measurement product.”

However, Wieser suggested that with Google’s acceptance of Nielsen’s OCR data, the firm is now better positioned than comScore to dominate the video ad measurement space. “Many large agencies and advertisers have chosen to use vCE to measure their online video campaigns, in part because vCE could better capture viewing activity across a broader array of video-based digital media,” Wieser wrote.

Nielsen already has close ties in measurement with Facebook, which unveiled a new video advertising service this summer -- although Wieser was quick to question the strength of the social network’s offering.

comScore's vCE Tags Vs. "Next Competitor" 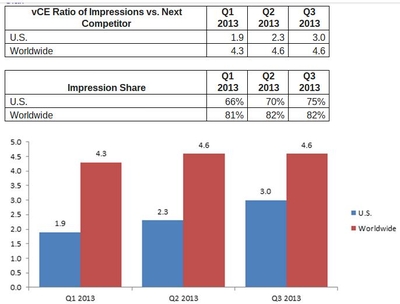