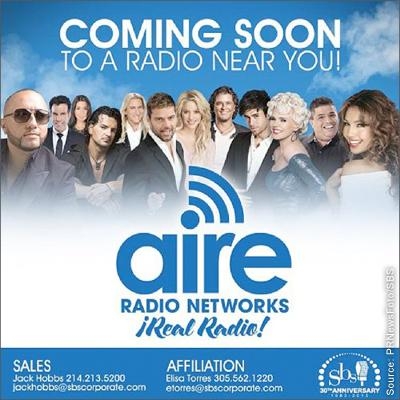 The five new networks, featuring shows addressing events, health, family, finances, education, sports, and entertainment, will reach a total of around 12 million listeners, or a quarter of the U.S. Hispanic population, in 30 media markets, including nine out of the top 10, around the country every week.

In addition to syndicating content, SBS will also provide promotional tie-ins, experiential marketing, and online and mobile platforms. The Aire Networks are set to debut January 1.

The SBS move comes as Spanish-language broadcasters struggle to fill the gap left by the departure of Eddie “Piolín” Sotelo, host of “El Piolín de la Mañana,” from Univision for satcaster Sirius XM in the wake of a still-unresolved sexual harassment lawsuit.

As noted, SBS is just the latest in a series of media companies introducing new content offerings for the Hispanic market. In October, ESPN Deportes Radio signed a deal giving it Spanish-language broadcast radio rights for NFL football games in the 2013-2014 and 2014-2015 seasons.