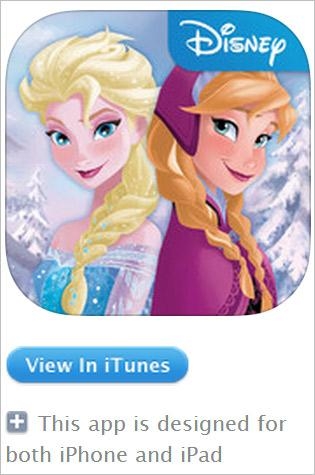 In most cases there isn't much that is subtle about movie promotion. Oh, sure -- there are those cases when niche movies find unexpected audiences via social media and other discrete channels. Back in April, Weinstein Company lead digital marketer Blad Norman told the Video Insider Summit about how Silver Linings Playbook found a male audience through the theme of sports fan superstitions and even deeper themes of depression among men.

But in most cases, blockbuster movie marketing is as subtle and nuanced as carpet bombing. Tonnage, reach and frequency and drowning out the other three weekend openings -- those are the ground rules. Now Disney has always been adept at building audiences in advance of new family films by leveraging print, online and TV properties to get kids interested in new characters and plot situations before they get to them on screen. But the app universe and the proliferation of gadgets among kids in the home has introduced the app as a way to cultivate movie interest by engaging audiences in the story.

According to a report this week in Variety, Disney animation marketers now see tablet and smartphone apps, especially the interactive storybook format, as a critical tool for pre-premiere promotion. The upcoming animated feature "Frozen" has its own richly constructed app that enables the child and parent to experience the film’s world from the perspective of either sister characters at the center of the action. The idea is to give audiences a rich engagement with the film world and its characters well before entering the theater.

Disney is not just tossing a promo app off thoughtlessly -- they actually add a dimension to the film experience by letting users move through the story from a different perspective and play the characters. And they do not price these storybooks as if they are disposable promotion. The Frozen storybook is priced at $6.99.

This is the third such Disney app effort in this vein, coming on the heels of apps for Monsters University and Planes. According to Disney, pre-release apps are now a normal part of the cycle for them. There is a lot invested in Frozen, since they see the main character joining 11 previous “Disney Princesses” who have proven to be massive merchandising opportunities for the company over the years. Just consider the number of licensed Halloween costumes.

Other media marketers might learn something from this good example. Most marketers throw a licensed game, video assets or some clever but disposable tchotchke at the app version of a film property. Disney’s app storybooks are much richer than that, and they emphasize actual story and character. They try to get the young user to identify with characters before they have seen them within the narrative. They actually encourage a deeper -- dare we say, aesthetic -- involvement with the work than we see in most adult-focused movie apps.