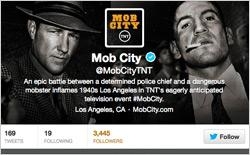 Sweet on Twitter, the entertainment business continues to test the network as a tool for marketing, measurement and even script adaptations. Blurring the lines between marketing and content creation, TNT is floating an “adaptweetion” of "Mob City."

Beginning Monday, the story is expected to unfold over three days -- taking Twitter followers to the point just before the end of the first episode, when a dramatic turn of events is set to occur.

Created in collaboration with Deutsch NY, TNT has launched a microsite -- mobcity.com/script -- to serve as a hub for the debut of the adapted script. Along the entire @MobCityTNT feed (in chronological order), the site will feature real-time dialogue between characters, Vines of pilot footage, talent commentary and other content.

If all goes according to plan, the end result should be a complete screenplay accessorized with a lively media and fan interaction.

In classic cliffhanger fashion, viewers will have to tune in to watch when "Mob City" premieres on TNT, this Wednesday, to find out what happens at the end of the premiere episode.

“The beauty of this [effort] is that it is using the storytelling of the show itself as the marketing vehicle,” Tricia Melton, senior vice president of entertainment marketing and branding for TNT, TBS and Turner Classic Movies, told Online Media Daily.

Despite the novelty of the initiative, Melton said there is nothing gimmicky about the show’s Twitter strategy.

“Our approach has consistently been to let the quality of the show speak for itself,” she said. “We are just illuminating it and giving new context in a different platform, i.e., Twitter.”

As for whether more shows are likely to get the Twitter treatment, Melton said it was possible. “The approach of tweeting the script is not a one-time idea necessarily, but does require the type of script that can live as gracefully on Twitter as it does on the written page.”

More broadly, TV networks and film studios can’t seem to get enough of Twitter as a marketing and measurement tool.

Trying to meet this demand, Nielsen recently debuted its highly anticipated Twitter TV Ratings, which endeavors to measure TV-related social media conversations, as well as shed light on the Twitter users who have those conversations.

Domestically, 19 million unique Twitter users talked TV during the second quarter of 2013, according to SocialGuide. All told, they sent out 263 million TV-related Tweets.

Based on the book "L.A. Noir: The Struggle for the Soul of America’s Most Seductive City," by John Buntin, "Mob City" is set in post-war Los Angeles, home to movie stars, studio heads, returning war heroes and corruption.

"Mob City" is being produced by TNT Originals