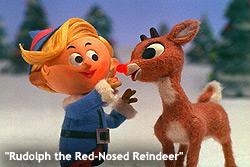 How can it be that a Christmas special produced in the Sixties continues to dominate holiday programming almost 50 years after it was first telecast?

I’m as big a fan of “Rudolph” as anyone else. I have been since I first saw it in the Sixties. For me, the Christmas season officially began with its annual telecast. I remember how excited I would get -- an excitement shared by my brother and our friends in the neighborhood -- when the opportunity to watch “Rudolph” drew near. I remember the urgency of it all: We had to be in front of our (black and white) TV sets when it was on, lest we miss a minute of our only opportunity to see it that year. And I remember the wistfulness that followed when “Rudolph” ended and the realization that we had to wait another 12 months to see it again would set in.

But that was TV way back then. At least since the mid-Eighties, when VCRs began to spread across the land and high-priced videos of movies and television specials became available, most kids (and grown-ups who are young at heart) have been able to watch “Rudolph” whenever they want via an ever-expanding selection of viewing platforms. The unique excitement that once accompanied the limited opportunities to watch “Rudolph” has long since passed (which is also true of everything else).

Consequently, there should be nothing special about watching “Rudolph” on CBS or anywhere else. And yet, as the ratings indicate, the annual network telecast is still a special event -- perhaps not as titanic an event as in decades past, but a significant one nevertheless. Does this speak to the power of broadcast television to turn almost anything into a must-see program, or to the enduring quality of “Rudolph” itself? I suspect the answer is “both.”

Regardless, “Rudolph” remains a marvel of simple basic family entertainment that continues to be enjoyed by people of all ages, even though it is growing very old. It is certainly easy to understand why: The characters are iconic and the songs are seasonal classics that will always be with us.

I’m mindful of other holiday treats, including “Mr. Magoo’s Christmas Carol” (1962), “Frosty the Snowman” (1969), “A Charlie Brown Thanksgiving” (1973) and “The Easter Bunny is Comin’ to Town” (1977). But it would seem that there haven’t been any truly special animated holiday specials in decades. Surely there are more ideas out there waiting to be developed and more properties ready to be produced.

tv
1 comment about "Almost 50 Years Later, 'Rudolph' Is Still A Holiday Powerhouse".
Check to receive email when comments are posted.
Next story loading