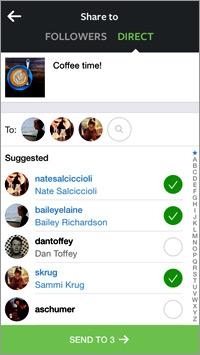 Instagram on Thursday launched a new feature that allows users to privately share photos and videos along with text. With the rollout of Instagram Direct, users can now send chat-style messages with photos or videos to specific people on the social network.

“There are, however, moments in our lives that we want to share, but that will be the most relevant only to a smaller group of people—an inside joke between friends captured on the go, a special family moment or even just one more photo of your new puppy,” stated an Instagram blog post today about the new service.

In the company’s updated iOS and Android apps, users now see two new tabs when they go to post a picture reading “Followers” and “Direct.” The latter option allows someone to select a specific friend to send a photo or video to with a text message.

Once the message is opened, the sender can see who has opened it. And if someone liked it, a heart appears next to a recipient’s profile picture. Direct messages can be sent to up to 15 people at once, and Instagram will also suggest recipients, as well.

When someone opens Instagram, they’ll see a new icon in the top right corner of the home screen giving users access to new messages when tapped. A user can then follow up by chatting privately with a friend or group of people.

Instagram also noted that it provides a measure of control with the new feature. “Photos and videos that you receive from people you follow will appear immediately. If someone you’re not following sends you a photo or video on Instagram, it will go to your requests so you can decide if you want to view it,” the company said.

Given the growing competition Instagram is facing from apps like WhatsApp, Snapchat and Kik, it’s surprising it hasn’t added a messaging component before now. Had Instagram parent Facebook been successful in its reported $3 billion bid for Snapchat last month, it may have come even sooner. As it is, the start-up this week disclosed raising another $50 million in venture funding, while it seeks out a better offer.

At the same time, Instagram is keeping pace with other social properties like Twitter, which has long offered users the ability to send private messages on its service. Even so, Instagram seems intent on maintaining its core identity as a photo-sharing app, since each conversation has to start with a photo rather than just a text message.

After all, the advertising options Instagram introduced in October are geared to photos and videos, not text. But the new private messaging could help boost interaction and usage on Instagram overall, which in turn would serve its goals as an ad-supported business.