Real-time marketing has been one of the hottest topics in 2013, but that’s not because it’s new to the marketing world. It has more to do with the digital channels available today -- like social media -- and how brands and consumers are interacting with one another on those channels.

Altimeter Group today released a report titled “Real-Time Marketing: The Agility to Leverage ‘Now.’” In it, the company points out that real-time marketing has been around “for well over a decade,” and defines it as such: “The strategy and practice of responding with immediacy to external events and triggers,” which is a much better definition than “What Oreo did.” 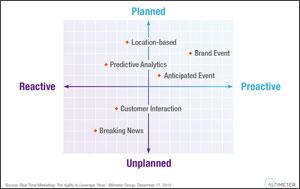 are either proactive or reactive and planned or unplanned.

“Brand events” — such as product launches or conferences — and “anticipated events” are planned and proactive.

As a result, Altimeter calls breaking news possibly “the most spontaneous, challenging and difficult type of real-time marketing brands will encounter.” The report notes that “advance preparation is all but impossible,” and that “all too often breaking news isn’t good news, so an acute degree of sensitivity is called for.” There are plenty of examples out there of companies not being sensitive.

The report also spells out twelve steps marketers need to take to prepare for real-time marketing, starting with listening and learning. The report reads: “Success in real time is contingent on understanding your audience, who they are, where they go, what they care about, how they perceive the brand, etc. While traditional research methods like focus groups and surveys are instructive toward this end, the literal real-time nature of RTM requires more real-time information gathering. Listening and analytics tools help monitor the audience’s pulse, sentiments, behaviors and buzz as it happens and as it evolves. Are customers complaining about not getting a response? What are competitors doing, and what is happening in adjacent industries?”