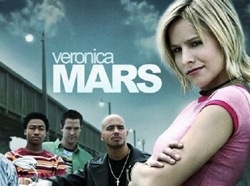 How many more canceled television series will return to life via Kickstarter or other crowdsourcing initiatives? And who will enjoy the profits from those projects if they come to pass?

These are the questions that went through my mind earlier this month when I learned that Warner Bros. will release the feature film follow-up to “Veronica Mars” in theaters on March 14. That's approximately one year since series creator Ron Thomas and its star, Kristen Bell, began raising money for the project on Kickstarter. The campaign ended on April 12, 2013. More than $5.7 million had been raised. That's a very small budget for a feature film but a very large haul for a Kickstarter effort.

It isn't unreasonable to assume that if the “Mars” movie is a success there could be more fan-financed feature film follow-ups in the not too distant future. If the producers and talent involved are willing to work cheaply, if their fans are willing to shell out the cash, if it can happen at a reasonable cost (meaning for far less money than was spent on production of the originals) and if a big network or studio is ready to do the heavy lifting required to actually distribute the end product, this new model could actually stick.

But what happens then? Let's go crazy for a minute: Suppose the “Veronica Mars” movie makes back its modest production budget as well as the monies that Warner Bros. puts into the project? In other words, suppose it makes a surprisingly big profit? Where does that money go -- to Warner Bros. or the talent or – and this is a stretch – is it divided up between the investors? There is little chance of the latter. More than 91,500 people put money into the “Mars” movie budget, ranging from $1-$10,000 each.

It's not as if the tens of thousands of people who backed the “Mars” movie via Kickstarter are expecting anything more in return for their investments. As is the case with most Kickstarter campaigns, the people asking for money offered all kinds of tantalizing goodies up front. In the case of “Mars,” these included “exclusive backer updates” throughout the production (for the $1 funders) to DVDs and T-shirts (for the $100 backers) to opportunities to give names to characters and appear as an extra in the film (for those contributing $8000) to an actual speaking role in the movie. The latter was limited to one backer and required a $10,000 contribution. The backer hasn't been identified, but we'll know who it is when the film is released because the speaking role, as detailed on the movie’s Kickstarter page, is that of a restaurant waiter or waitress who has been serving the title character and her male companion. He or she will be seen approaching the table and handing the man their check while speaking the words, “Your check, sir.”

I think it's fair to say that most of the talent involved in this movie is financially comfortable, if not very well off. And they are all involved in other projects that bring them a lot more money than most “ordinary” people will ever see. Furthermore, it is not inconceivable that some of the talent involved in this movie will receive future lucrative offers of employment based on the work they do in it. Conversely, while I realize that some of the backers may be people of significant financial means, I'm willing to bet that most of them are not. So the question has to be asked: Is it fair for the “haves” to ask the “have-nots” to add financial support to their already uncommonly lucrative careers?

Even if this isn't the case with the “Veronica Mars” crew … even if they aren't particularly well off, relative to others in their business … surely the “Mars” movie will inspire future projects in which the “haves” ask those who don't have as much to pay their bills.

I also wonder whether there are affordable opportunities here for certain advertisers of relatively modest standing to participate in this game. Are you unable to hire an agency or mount a full-fledged campaign? Why not fund a few smaller projects in exchange for product placement, etc?

It's clear that people enjoy backing Kickstarter projects and other crowdsourcing efforts. (I have supported a couple, and the end result can be quite rewarding -- not as rewarding as helping people in third world countries become self-sufficient, as I have learned over at kiva.org, but exciting in its own small way.) Yet I can’t help but wonder – if a movie like “Mars” can be made for a “mere” $5 million, a modest amount by Hollywood standards, couldn’t the talent and their acquaintances have scraped that cash together themselves, in return for profit-sharing, tax write-offs or whatever other benefits they might potentially enjoy?

For anyone who may not know, “Veronica Mars” is a fondly remembered noir-ish cult drama about a teenage girl who assists her private eye father in solving crimes and ferreting out bad people in a small California town. Produced and owned by Warner Bros., which will supply unspecified additional funding for the movie in such areas as promotion, marketing, and distribution, “Mars” began life on the late UPN network in September 2004. It transitioned to The CW in September 2006 for its third and final season.