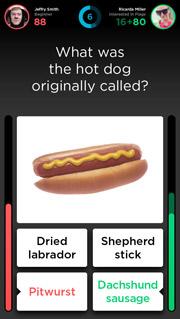 When my daughter planted herself on the arm of my easy chair yesterday to show me her favorite apps and asked for mine, two things struck me right away. First, I am old. I actually have an “easy chair” upon which my 21-year-old daughter sits so I “don’t have to get up.”

Second, we were no doubt part of a new holiday tradition: finding and comparing apps. As Bloomberg has already observed, Christmas Day is the Black Friday for the app world.  Bloomberg cites Harris Interactive survey figures that 30% of Americans planned to download apps on Christmas Day. Last year there were 325 million downloads on Dec. 25. App Annie VP Marcos Sanchez got it right in saying “It’s the magical trifecta of something new, time to waste and wanting to fill your time with fun stuff.”

Game developers especially are timing key mobile releases around the season, as well as directing marketing budgets here. Bloomberg quotes analytics firm SuperData to show that the cost of acquiring new download customers via ad networks has jumped to $2.30 in December. The SuperData report contends that game publishers need to keep their new customer playing for at least two months for the investment to pay off, usually in in-app game fees.

I would add that Christmas is also the top day for live social networking with family. Neither my daughter nor I have new gadgets this Christmas. But the smartphone deck has attained such a level of importance and intimacy in people’s lives that the sharing of them is a new kind of familial bonding. I showed my daughter the new iOS port of the original "Tomb Raider," which sparked a long remembrance of her lifelong devotion to Lara Croft and her many iterations. I gifted her the Tomb Raider app and wished her good luck. since the touch screen controls are unusable.

I also demonstrated our new family gadget, the Phillips Hue LED light system that uses an app to control the full color range and intensity of lamps in the living room.

“Your house lights are on the Internet now?” she gasped. It's good to know the old man can still impress the kid. She posted an Instagram video of it in action, perhaps risking the kind of app-depicting, app-infinite loop that could create a hole between dimensions.

She, on the other hand, introduced me to QuizUp, which I have been meaning to try. This live social trivia game is another reminder of how well elegant, simple designs play on mobile devices. It is a straightforward trivia contest that matches you with people around the world. It takes all of two minutes to get through a round. There is no learning curve. And the sleekly designed app wraps around the simple core a rich and engaging experience that targets your points of pride. The massive network of players and topics means there's no subject matter too narrow to have a player available. And there was no way I was going to let some newbie outrun my knowledge of comic strip history.

She also showed me why Reddit, not Buzzfeed, is her network of choice, and how she uses the Imgur image hosting service to push photos onto Reddit. She is also an active user of the Starbucks and Dunkin Donuts apps, regularly leveraging their in-app specials and rewards.

Is app swapping quite as cozy and sentimental a Christmas tradition as others we continue, like giving my daughter a new ornament each year to use for her eventual family Christmas tree? Well, maybe it isn’t as Hallmark-worthy.

But as in all things cold and technological, humans inevitably humanize them. We force these otherwise trivial objects into the richer framework of our relationships and lives. We discover little things about one another through the choices we make, the mundane rituals of buying, posting, discovering via these smartphone widgets. An hour of sharing apps let me peek into other aspects of my daughter’s everyday life I hadn’t known or appreciated before. The big lie about so-called 'technological change' is that it never in the end is really about the technology. It is always a story about how certain devices at certain moments in history resonate with people because we are able to use them in ways that are oh so human, personal, social and ultimately meaningful.

And someday decades hence she may recall to her kids how she and “grandpa” used to compare iPhone decks on Christmas. Maybe she will dig into her old Instagram feed and show them the video of us tinkering with connected LED lamps.

“Yes children, this was long before hologram Christmas trees and implanted personal sensors told all of the devices in a room your preferences before you entered.”

“Wow, mom. You had to use an app to control the lights back then? How did you have time to get anything done?”