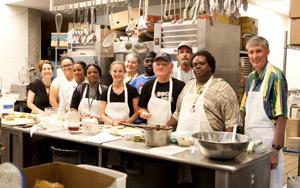 With America's passion for anything labeled "Local" still growing fast, Whole Foods Markets says it will increase its loans to local producers by $15 million.

The Austin, Tex.-based retailer had already pledged $10 million to the program, making low-interest loans to some 155 growers, producers and food artisans. Those include "pioneering" projects in biodynamic farming, non-GMO animal feed, and pollinator health, as well as more sustainable packaging.

Whole Foods' move is just the latest effort in targeting consumers' seemingly endless locovorian tendencies. Most mainstream grocery stores now offer locally grown produce. And Walmart has vowed to double the amount of locally grown fruits and vegetables in its stores by the end of 2015.

“Expanding the Local Producer Loan Program is a direct result of the innovations and successes of our loan recipients,” says Betsy Foster, Whole Foods' global VP of growth and business development, in its release, adding that it helps the chain “stay connected with both our neighborhood producers and our global food community.”

One example is WholeSoy & Co., a San Francisco-based producer of non-GMO, organic, vegan, gluten-free soy yogurt, which got a $400,000 loan (one of the program’s biggest) to build a dairy-free yogurt facility.

But other retailers are hardly Whole Foods' only competitors for local loyalty. While foods sold direct-to-consumer are still a small part of the agricultural food chain, it's one of the fastest-growing. The U.S. Department of Agriculture, which has been tracking farmers' markets since 1994, when there just 1,755 of them, says there are now 8,144 markets. That represents a 3.6% increase from last year. The Community Supported Agriculture effort is also growing fast, with more than 2,500 in place, as well as thousands of individual farm stands, farm-to-school and restaurant-led farm-to-fork initiatives.

food, retail
1 comment about "Betting On Local, Whole Foods Loans Another $15M".
Check to receive email when comments are posted.
Next story loading