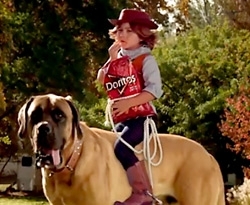 We're a month away from the Super Bowl -- still the biggest television event of the year and still the premiere showcase for dozens of exciting new commercials, and already I have identified the ad that I think will be the best of this year's bunch, simply because I can't imagine another one that will be as utterly disarming in its clever charm and heartfelt messaging.

Of course, it first has to make it into the Super Bowl telecast, which is easier said than done. It's a civilian-made commercial for Doritos currently available on the Web page the brand has created to showcase the finalists in its 8th annual “Crash the Super Bowl” contest. The ad is titled “Time Machine,” and it is one of the five homemade spots considered the best in this year's competition. As always, it falls to consumers to vote for which of the ads will actually be seen during the telecast of the Super Bowl. As of January 3 there are 25 days left to vote.

Due to the not always popular outcomes of consumer voting (as witnessed on countless reality competition shows) “Time Machine” may not even get to the Super Bowl, which is inconceivable to me, but that's only one man's opinion. Everything about this little production pushes all the right buttons, including the Buy Me Button, the only one that really matters to any brand. It evokes all the right responses: Heart, humor, innocence, fun, a positive emotional connection to the product on display, happy memories of one's own childhood or of one's child's childhood, and more.

But best of all, it's entertaining and memorable -- and it’s the kind of commercial one actually would want to recommend to friends around whatever real or virtual water-cooler one cares to congregate. It's also a spot that might prompt someone familiar with it to hush the room during a Super Bowl party, urging all to pay attention.

Okay -- I may be over-selling “Time Machine” a bit, but that's probably because it is simple, straightforward, low-budget and it gets the job done. That sets it apart from most of the big, bloated commercials that have debuted during the Super Bowls of recent memory, almost all of which represented little more than limited creativity and huge wastes of money. Besides, I’m not the only one getting behind this little gem. The “Today” show gave it a great big push this morning (along with another “Crash the Super Bowl” finalist titled “Cowboy Kid,” which was cute but very familiar). That's how I found out about it.

I can't remember the last batch of Super Bowl ads that made me feel good about the advertising business. Usually, I’m struck by their collective lack of talent and consumer insight. It’s like watching all those new broadcast shows that represent the best of the television business (and the work of thousands of people spending millions of dollars) crash and burn every fall when the new season begins, but the experience is condensed into three or four hours.

I wonder how many of the talented people who have participated in the last seven “Crash the Super Bowl” contests have landed work in the advertising business. Could it be possible that the answer is “none” or “only a couple”? Regardless, it seems to me that the kind of new (and untainted) blood represented in these contests every year (including many who don’t even make the top five) might be just the thing the business needs to make commercials watchable again, rather than something to be avoided by any means.

In addition to “Time Machine” and “Cowboy Kid” (which features one of those smart-mouthed tykes that Krampus the Christmas Demon would have disciplined in the riotous recent holiday episode of Fox’s “American Dad”) this year’s “Crash” finalists include the funny “Breakroom Ostrich” and “Office Thief,” both set in workplaces, both sure to entertain and both reminiscent of hundreds of other office-set Super Bowl spots. Like “Cowboy” they are cute but not necessarily strong enough to be remembered the day after the Super Bowl.

The fifth finalist, which will probably prove the most popular (or at least the most talked about) because it is so thoroughly disgusting, is titled “Finger Cleaner.” It features men working in a garage and eating Doritos who seek to remove that powdery slime that Doritos leave on one’s fingers by sticking their digits into a little hole in the wall. On the other side of the hole a man eagerly sucks the fingers clean as they poke through. Yes, all sorts of vile thoughts come to mind while watching it, none of which will be shared here.