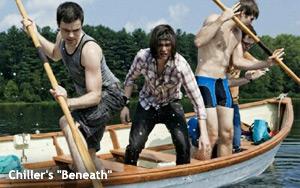 Following yesterday’s column, here are five more shows that really made a difference in 2013 yet didn’t show up on many (if any) best-of year-end lists. Every one of them will be with us in 2014, and they all deserve ongoing attention.

“The Five” (Fox News) – Regardless of one’s politics, Fox News’ daily afternoon talk show “The Five,” in which a quintet of Fox News personalities (most often Dana Perino, Greg Gutfeld, Kimberly Guilfoyle, Eric Bolling and the invaluable Ben Beckle) hash out the day’s news from conservative and liberal points of view, was the most stimulating and thought-provoking news and opinion series on television. I have long said that my dream “news” program would be a daily hour in which Bill O’Reilly and Jon Stewart discuss and debate the day’s headlines. (They are just great together on those rare occasions when they appear as guests on each other’s shows.) That will never happen, but for now “The Five” will do just fine. And by the way, why is it that these Fox folks can get into heated exchanges without ever degenerating into the damaging lack of professionalism that has recently compromised so much of MSNBC’s on-camera “talent”? There are ways to get one’s point across and even engage in extreme bloviating without becoming offensive.

“Face Off” and “Project Runway” (Syfy and Lifetime) – As celebrations of unfettered creativity there is still nothing better than Syfy’s make-up challenge “Face Off” and Lifetime’s fashion forward “Project Runway.” Cable’s two best reality competition series continued to engage, inspire and entertain in double cycles during 2013. But I have complaints. I wish “Face-Off” would follow the lead of “Runway” and expand to 90-minute episodes, because it often feels quite rushed, and we sometimes don’t see enough of the actual craftsmanship that goes into each contestant’s make-ups. And I would like to see Lifetime somehow recruit better on-camera talent for “Project Runway All-Stars,” which runs between cycles of the mother show and always comes off as a much lesser exercise. It has yet to find an appealing hostess (or host) and its panel of judges is decidedly underwhelming. It’s bad enough that Heidi Klum isn’t on board, but couldn’t Tim Gunn find time for “All-Stars,” too?

“General Hospital” (ABC) – Rising from the ruins of the broadcasters’ collective efforts to marginalize the one remaining program genre they can call their own, the daily daytime drama, the four survivors of the last decade’s wholesale soap opera bloodbath -- ABC’s “General Hospital,” NBC’s “Days of Our Lives” and CBS’ “The Young and the Restless” and “The Bold and the Beautiful” -- upped their game, sharpened their writing, respected their histories and their audiences and saw their ratings rise, proving that so many beloved soap operas didn’t have to die at the hands of flummoxed network executives. They simply had to be better shows. But 2013 was “GH’s” time to shine in every way, as the soap marked its 50th anniversary year with the returns of long-gone and much-missed characters from the ‘70s and ‘80s and popped them into cool new stories that weren’t afraid to be wacky, sexy, romantic, melodramatic or heart-wrenching (or any combination thereof) when they had to be. Best of all, “GH” cut way back on the embarrassingly bad stories involving temperamental mobsters and the sleazy women who worshipped them that had long-ago pummeled the life out of it. I could have done without the violent Christmas Eve shootout that reminded me of just how bad the show had become before the very gifted executive producer Frank Valentini and head writer Ron Carlivati came along to save it from itself, but in every other way watching “GH” in 2013 was as rewarding an experience as watching it during its 80s heyday.

“The Graham Norton Show” (BBC America) - It’s unfair to compare a talk show hosted by a funny man that runs only one night a week with late-night programs hosted by funny men that run five nights a week, so I’m not going to do that. But the BBC’s “Graham Norton Show” consistently hit it out of the park last year with fascinating batches of big-name guest stars clustered together on its big red couch. The affable Norton makes it all look so easy and casual, and he is certainly a big draw for American celebrities looking to promote projects across the pond. Maybe it’s the alcohol they are allowed to sip during the show. Maybe it’s the dynamic that results when all of the show’s guests are assembled together, rather than trotted out one at a time. Maybe it’s Norton’s unflagging wit, which is somehow gentle and civilized even at its most wicked. Wouldn’t it be grand if an American television network produced a once a week, one-hour talk show like this one? Wouldn’t Neil Patrick Harris be the perfect host?

“Leave It to Beaver” and “Lassie” (Me-TV and Cozi TV) – It’s not like I haven’t been enjoying the programs of my youth (or even those that pre-dated my existence) for a while now on Me-TV and Cozi TV (along with those other great retro networks Antenna TV and This TV), but two shows from way back when really broke through for me this year: The wholesome family comedy “Leave It to Beaver” and the family drama “Lassie.” Watching early, leisurely paced, black and white episodes of these shows, which reflected the innocence of childhood and gently reinforced the importance of teaching kids to respect the grownups in their lives, I often felt like I was looking at transmissions from another dimension, if not another planet. Were families and marriages and schools and communities ever as functional as those featured in these shows? Where are the Cleavers and the Waltons and the Huxtables today when we need them more than ever?

As a postscript, here is some late praise for the Chiller original movie “Beneath,” which didn’t qualify for a list comprised of series but is worth mentioning as a bright spot in 2013. While the rest of the world was salivating over Syfy’s gleefully insane “Sharknado,” Chiller served up this lovingly crafted little tribute to those low-budget Eighties horror movies that now occupy late-night cable schedules. The formula: Good-looking teenagers are stranded in a boat in the middle of a lake, where they inevitably become food for a giant man-eating fish. The fish, I was pleased to see, was not a cheesy CGI special effect construct. Rather, it was a model, or a “practical” fish, as it was known on set. It was obviously a fake but the longer I watched the more I accepted its intended menace. “Beneath” was actually a “Lord of the Flies”-like story about moral dilemmas and the survival of the fittest, but that was too much to think about while having such a good time.

tv
2 comments about "'General Hospital,' 'Face Off,' 'Lassie': A Top Ten List For 2013 That You Didn't See Anywhere Else - Part 2 ".
Check to receive email when comments are posted.
Read more comments >
Next story loading