The Winner And Still Champion: Here's My Forecast 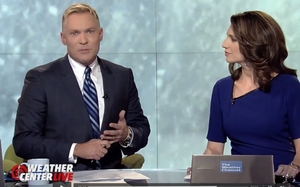 Much of his answer had to do with digital extensions of his weather brand to mobile and social platforms, where access, speed and the reliability of information is vital. When it came to the subject of his flagship TV property, The Weather Channel, it was more about weaving Mother Nature in as part of its entertainment narrative, introducing long-form content, even reality TV shows.

Two years later, I’m wondering if that was the right approach, and whether Weather is as vital to TV viewers as it is to digital’s always-on consumers. We’re about to find out, at least as far as satellite TV viewers are concerned.

More than a week after DirecTV dropped The Weather Channel and replaced it with Weather Nation, Kenny issued an “open letter” to the satellite TV company’s board of directors, asking them to “come back to the negotiating table.” He issued the letter via full-page ads in major daily newspapers. It’s a classic hardball tactic, but if you ask me, I think the message would be better directed to consumers, than the DirecTV board.

Don’t get me wrong. I know lots of people are passionate about The Weather Channel. In his letter, Kenny says about 90,000 have pledged to “switch providers,” and millions of others have either visited the Web or made calls expressing their frustration. But is the channel truly differentiated enough that viewers will actually cut the cord to their satellite dish, the way they might with AMC or a major broadcast network. We shall see.

Part of my reason is what Kenny said to me previously -- that his company has done such a good job of making its most vital information available to people in so many other forms that I don’t believe a TV channel is the most necessary way of gaining access to it. And so far, I don’t think it has created the kind of emotionally-bonding programming that people cannot live without -- not yet.

I think part of it is that TWC has been focusing on the wrong character, Mother Nature.

“She’s a great actress. We’re very lucky to have her starring in all of our shows,” Kenny told me two years ago.

It has tried to personify the weather in other ways too, naming winter storms to give them personalities in a way we historically reserved only for hurricanes or big tropical storms.

But that only gets you so far. What TWC really needs is some actual human characters, people oth 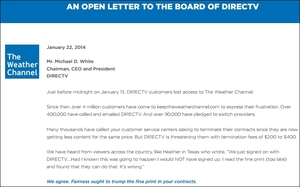 er people can relate to, bond with and tune in for. Someone like Sam Champion, the former ABC “Good Morning America” weather anchor, who effectively becomes the new face of The Weather Channel beginning this week.

Champion's new morning show won't debut until March, but he’s already beginning to have a presence in prime-time, and over time, I think he will help to personify The Weather Channel in a way Mother Nature never could -- by actually being human.

If there’s one thing Champion proved in his years at ABC, it is that he is inherently personable, and incredibly likeable. He’s also incredibly familiar to most Americans, given his years of prime network weather time (that’s the morning, not the evening).

I’m no forecaster, so I can’t predict what will happen at the negotiating table, but if TWC continues to focus on people other people can relate to -- and importantly, feel comfortable with and trust -- I can predict it will begin to form a bond with viewers that even the most compelling whether narratives cannot sustain. Because if you do that, you have a relationship with people that transcends storylines and weather patterns. You become part of their lives. Try bumping that off a satellite feed and see what happens?