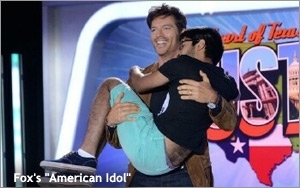 Every year at this time I’m struck by the fact that television's midseason is consistently more exciting than its fall premiere period. That wasn't the case when CBS, NBC and ABC alone ruled the medium. Back then, fall was all. But ever since cable began stridently ignoring long-established scheduling patterns, in the process making every month count -- and Fox began loading January with its big guns, namely “American Idol” and “24” and now “The Following” -- the first four months of each year have become much more interesting than the last four.

It doesn’t help that the broadcasters still insist on piling dozens of new series onto their schedules in September and October -- as if thinking that viewers have nothing better to do than stop watching their cable choices or returning broadcast favorites and sample the new stuff, much of which we have been conditioned to expect to disappoint us and be cancelled or placed on hiatus by Thanksgiving. Fox recently announced that it is going to try to move itself out of such historically destructive patterns and attempt to operate in a way that makes more sense in the new media landscape. Its broadcast competitors have very guardedly suggested that they support Fox’s willingness to try something new, but aren’t yet willing to change their ways.

Well, the media business has a habit of changing whether companies care to lead or follow, as evidenced by the growing realization that in television, January is the new September. The big events of the season -- which this month and next include NBC’s coverage of the Winter Olympics, CBS’ telecast of the Grammy Awards, Fox’s presentation of the Super Bowl and ABC’s annual broadcast of the Academy Awards -- certainly supercharge the early months of the year, even if the multiple scheduling changes and series preemptions that they bring about can at times prove problematic.

Big events aside, just look at what television has delivered in January and what’s coming in the weeks ahead. NBC successfully launched the new scripted drama “Chicago P.D.” The excitement it is generating in late night is unparalleled, with Jay Leno ending his run as host of “The Tonight Show” in two weeks and Jimmy Fallon moving in right after the Olympics, and Seth Meyers taking over as host of “Late Night” at the same time. Later in February, NBC will bring back the critical favorite “Hannibal,” which is poised to break out in its sophomore season; premiere its best new comedy of the season, “About a Boy,” and kick off another cycle of “The Voice.”

Over at Fox, the 13th season of “American Idol” is already underway, and while it may not pull the outsize ratings that it once enjoyed, it still outperforms almost everything else on television. “The Following” officially begins its second season on Monday. The new legal drama “Rake,” starring Greg Kinnear, launched last night. Fox also recently premiered the new comedy “Enlisted,” which critics are supporting but the audience has yet to find. (That’s a shame, because “Enlisted” is a keeper.)

ABC started the new year with a splat, suffering the instant failures of mini-series “The Assets” and limited series “Killer Women.” But its popular comedy “Suburgatory” has returned, and it has several intriguing new dramas set to debut after the Olympics, including “Resurrection” (arguably ABC’s best new series of the year) and “The Black Box.” If all else fails, “Dancing with the Stars” will return in March.

CBS isn’t up to much, but it doesn’t have to be, given the overall strength of the shows on its schedule -- especially “The Big Bang Theory,” “NCIS” and “The Good Wife.”

And then there’s PBS, which is showing all other television entities how it’s done with the return of smash success “Downton Abbey,” now in its fourth season and reaping higher ratings than ever. The return of “Downton” every January has replaced the annual season premiere of “American Idol” as the most exciting event of midseason. For millions of viewers “Downton Abbey” is as important as that other scripted drama titan, “The Walking Dead,” which will return to AMC’s schedule in mid-February and once again traumatize all competitors.

Also making PBS a major player at midseason is the third run of its hit detective mystery “Sherlock,” which has proven to be wildly popular with young audiences not usually associated with PBS. It’s a shame that each season of “Sherlock” consists of only three installments.

HBO just debuted two exciting new scripted series, “True Detective” and “Looking,” and started the third season of its controversial comedy “Girls.” Showtime this month launched new seasons of its signature comedies “Shameless,” “House of Lies” and “Episodes” and a popular reality series it doesn’t seem to like to acknowledge, “Gigolos.” USA Network in early March will start a new season of its highest-rated drama, “Suits,” while launching a new comedy produced by Denis Leary, “Sirens.” ABC’s unstoppable hit “Pretty Little Liars,” now in its winter half-season, remains the most tweeted-about scripted series on television.