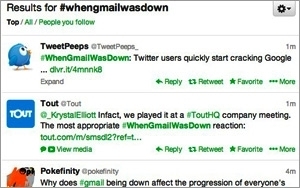 Google's Gmail service went down Friday, and some took to services like Twitter to complain. A steady stream of comments flooded Twitter #whengmailwasdown -- even after Google resumed service. The jokes ranged from the old standby "how many programmers does it take to change a light bulb" to "I signed into AIM for the first time in five years."

Into the early afternoon, some of the top trending keywords on Twitter were #Gmail and #Google.

The outage struck Google services from Gmail and Calendar to Talk and Drive. Google Groups was also affected, along with Docs, Slides, Drawings and more. The service disruption began in the early morning, resumed midday and then stopped working again in the mid-afternoon Pacific time.

Gmail referred users to its Apps Status Page, which confirmed the outage. "We're investigating reports of an issue with Gmail," the message read. "We will provide more information shortly." As of 2:05 Pacific time the outage continues sporadically.