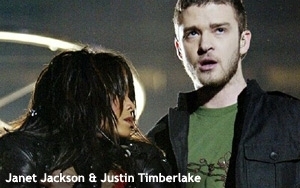 It's hard to believe it has been ten years since Janet Jackson and Justin Timberlake rocked the world with a Super Bowl half-time performance that was meant to be rudely suggestive, but instead became crudely explicit.

Accidental or otherwise, it never should have happened. Everyone involved should have been deeply ashamed -- not because Jackson's right breast was exposed, but because it happened during a depiction of simulated violence against a woman that was intended to entertain millions of people. Even without the “wardrobe malfunction,” everything about it was inexcusable.

But in some ways the aftermath was even worse. In the days and weeks and months that followed the exposure of Jackson's breast during television's most exciting, most watched and most lucrative night of the year -- the one night, I might add, when more kids watch television with their parents than any other -- the media spotlight directly targeted Jackson, as if she were entirely to blame for the incident.

While Jackson was certainly responsible for her decision to perform a song that wasn't particularly appropriate for a Super Bowl half-time show, and while she wasn't exactly forced to suggestively move about with Timberlake in a “dance” sequence that would culminate with one of her garments being torn off her body, she wasn't acting alone. Timberlake was equally responsible for what went down -- he, in fact, ripped Jackson's bustier as planned, albeit with an unexpected result. Furthermore, the routine that the two of them performed had been produced, directed and choreographed under the auspices of MTV, with its bad habit of frequently going too far during live productions and then offering lame hindsight apologies, and CBS, which claimed limited (if any) knowledge of what Jackson and Timberlake were going to do but nevertheless approved it for the network's air. I'm unclear as to what extent the NFL may or may not have been involved.

Timberlake wisely issued a public apology a short time later during CBS's live telecast of the Grammy Awards, which that year took place after the Super Bowl. Jackson stayed pretty quiet about the whole thing; if memory serves, she later talked with Oprah Winfrey about it on Winfrey's much-missed syndicated talk show and made clear she would never again discuss it.

The thing that bothered me most about the performance at the time was not the accidental reveal of Jackson's breast, which I missed when it actually happened -- probably because I had blinked or looked down to dip a chip or grab my drink. When I played it back, over and over again, and as I processed the media uproar that followed, I became increasingly aware that the reveal really wasn't as bothersome as the “choreography” of the performance, which depicted a man committing an assault against a woman for the enjoyment of the masses.

To this day I don't understand why the performers and the producers and everyone else involved with the telecast of Super Bowl XXXVIII thought it was okay to simulate violence against a woman as part of the fun. The media, as I recall, didn't really complain much about that, either. It was too busy collectively honking and bleating about a lightning-quick glimpse of a breast with a nipple ornament on it and somehow suggesting that it was all Jackson's fault.

That breast changed everything about broadcast television, bringing down the wrath of the FCC and leaving all of the broadcasters terrified of showing too much skin on their networks. Of course, it was at this time that basic cable networks began nudging into pay cable territory in terms of content, which gave them the advantage in creating smart adult entertainment for grown-ups that included realistic depictions of sex and nudity, however brief. All broadcast could do in its efforts to compete was ramp up the blood, gore and violence in its drama series. Tellingly, no matter how extreme the violence became in broadcast shows it never generated the outrage that followed that now-legendary breast flash.

Interestingly, just a few days before Super Bowl XXXVIII was telecast, CBS aired an episode of the soap opera “As the World Turns” in which a young couple had sex in a shower. This sequence represented an advance of sorts in that it pushed boundaries for what could be shown on daytime television (or prime time, for that matter). The shower door in the scene was frosted, so the naked bodies behind it could not be clearly seen, although bare behinds were plainly visible at various times. The sequence was very tastefully done, and it felt like a logical extension of what soap operas were all about: love, romance, lust and sex. After years of watching couples hop into bed, what was the harm in watching one suggestively lather up?

CBS did not receive any complaints about that episode of “As the World Turns” when it aired. Then, a few days later, along came the breast that shook the very foundation of society as we knew it. There hasn't been an incident of explicit broadcast nudity since.

To this day, nervousness about similar inappropriate exposure of body parts continues to send chills down the spines of broadcast executives everywhere, while the FCC continues to bend to the whims of certain subsets of our society that get all worked up over such stuff. Broadcast continues to be held to ridiculous standards when it comes to sex and nudity while depictions of violence and extreme horror flourish. The legacy of Super Bowl XXXVIII lives on.