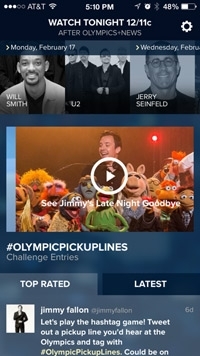 It is hard to imagine Jimmy Fallon starting a new show without an attendant app. One of Fallon's more endearing qualities is that he gets new media. Raised on video games, fully comfortable with social media, and a gadget nerd without shame, Fallon has proven adept at leveraging digital. He managed to escape the viewing ghetto that is late, late night by distributing some of his best moments online regularly.

And so The Tonight show With Jimmy Fallon app launched on the day of his new show's premiere, and it is just as unsurprisingly focused on engaging users in social media. The app has all the requisite show elements, including the calendar of guests in coming days and clips from recent shows. But Fallon also poses Twitter challenges for user submissions. The inaugural challenge involves making your own best Olympics pickup. Users get immediate feedback by seeing the latest and most popular responses in the app. Users will also be able to record video and submit that as well.

The signature “Jimmy” element in the app may be the arcade section which reproduces gaming experiences with a retro 8-bit era feel. Fallon is depicted in huge pixelated graphics skiing down a 2D slope or catching puppies descending on chutes.

Missing from the app is more intricate second-screen fare of the sort Conan and TBS have tried on their app. This app does not strive to distract from the first screen during a show but act more as a content complement and catch-up tool for fans. Notably, the integrated sponsorship from GE for the initial months of "Fallon on Tonight" are echoed in the app. The GE sponsorship is featured in the main marquee navigation and clicks through to the Web site with even more clips.

The app is a bit tepid, given the talent and energy of the new "Tonight" show host. While it checks off the predicted mobile boxes, the app does not reassure fans of Fallon that the "Tonight" show chair won't tame and diffuse him in the way it did a once-funny Jay Leno oh so many years ago.