The Mobilization Of Music Video 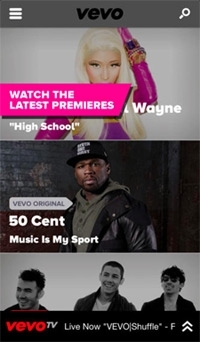 Veterans of the mobile space will recall that even in the pre-smartphone days, the industry understood that music would be among mobility’s strong suits. One of the first major content pushes from Verizon in the middle of the last decade was a massive music portal on its phones. And of course it was the marriage of the iPod with phones that really was the impetus behind the iPhone itself. And so it is not surprising that music video, arguably in a renaissance in recent years, has become a mobile thing.

The latest report from Vevo bears out that the majority of music videos from the market-leading company -- 60% to be exact -- are now coursing through devices, not the desktop. In fact, the fast migration of music video to handhelds and tablets speaks to just how much some media has been waiting to get the hell off of the constricted circumstance of desktop and even laptop viewing. Vevo says that last year mobile, tablet and connected TV consumption of its video content was up 176% worldwide and 118% in the U.S. The lifetime app downloads of Vevo increased 66% last year alone, suggesting the velocity of the shift as well.

Mobility may well help propel the revival of music video. Dormant and left behind by MTV long ago, the form seemed to lose its currency and much of its creative edge for years. In recent months the music video as provocation returned, with Robin Thicke’s risible “Blurred Lines” and Miley Cyrus’s cringe-inducing “Wrecking Ball.” Quick as we might be to denounce both examples as sophomoric plays for attention, one simply needs to recall the heyday of Madonna to understand that bad adolescent aesthetics have always played an important role in the form.

It is hard to argue that Western civilization is well served by the return of music video as a cultural force. Alas, this revival lacks one element that made the early 80s video scene so attractive -- visual experimentation. One of the striking aspects of the form's first years was that it became a testing ground for new ideas in editing, animation, and compressed storytelling. We complained at the time that music video styles were upending more tasteful Hollywood aesthetics. But in many ways they anticipated and tested many of the film ideas that would typify, for good or ill, filmmaking for the next couple of decades.

It is hard to see much of that in the music videos I have been sampling lately on my Vevo apps. Most of the music videos are focused on the personality and physical strengths of the singer. It is notable that all of Vevo’s most viewed and shared videos of last year are from Pink, Thicke, Prince Royce, Rihanna, et. al. Imagine Dragons is the only group in the list. This is not a bad thing, per se. In fact, it dovetails nicely with the new conditions of viewing most music video, on a one-to-one device.