Who Is Behind The 'Belief' Video And The First-Ever Hoverboard Prototype? 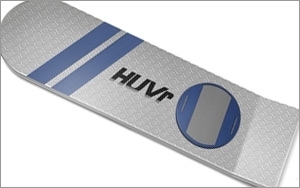 I see conspiracies everywhere. I believe that the Bay of Pigs was engineered by agricultural collectives with an interest in pork futures, that the moon landing was staged in my neighbor’s windswept backyard and that Paul McCartney died and was replaced by a look-alike at the pinnacle of his Wings megastardom. The fact that olives were left on my sandwich this afternoon has nothing to do with my neglecting to issue a no-olives directive and everything to do with the powerful olive lobby attempting to exert control over my mind and tummy-wummy.

So you can imagine how I felt upon viewing “Belief,” a clip in which HUVr displays a first-ever hoverboard prototype. Since its unveiling on Tuesday, it has racked up seven million YouTube views and 3,375,000 retweets, shattering the record set by a Dalai Lama selfie with the surviving members of Warrant. Despite the presence of C-plus-list celebrities (Tony Hawk, Moby, Terrell Owens) and production values that rival those of the finest industrial films, I immediately smelled a rat - not because hoverboards aren’t real, but because the video seems specifically engineered to invite close inspection. To that end, the string visible in the background at the 2:14 mark prompted an arched eyebrow here at Internet Integrity Central.

Not surprisingly, there’s been plenty of speculation about the party - or parties, or quasi-governmental operatives, or corporate interests abroad - behind the clip. In the 48 hours since its debut, theorists have focused on Hawk (because he performs skateboard-type maneuvers in the video and skateboard-type maneuvers tend to be an integral part of skateboard-type video games, one of which he may or may not be releasing in the near or distant future); Jimmy Kimmel (because in the wake of his flaming-twerker-girl stunt, which exposed the Internet’s gullible underbelly for all to see, he is the reigning king of viral-gotcha!-lism); Funny or Die (because some woman who used to work there apparently listed a “hoverboard video” credit on her resume, before Will Ferrell silenced her with a bullet above the ear; and whatever sad soul in Hollywood believes we need a Back to the Future, Part IV (because Christopher Lloyd/Doc Brown shows up in a vaguely DeLorean-looking ride and BTTF II featured a hoverboard chase scene and the HUVr web site teases the release of a product in December which is when big tentpole movies are released and so Jesus people do the math).

Separately, can you believe that something on the Internet may not be what it seems at first glimpse? Me neither. I weep for our children. They’ll never trust again.

Anyway, after donning my tin-foil-lined fedora and ingesting just enough cough syrup to make things interesting, I’ve narrowed down the list of suspects to five. When the perpetrator comes forward four days from now, with sellable wares in hand, don’t say you haven’t been warned.

Pepsi: It has the cash and its marketing folk just looooove to stir crap up on the Internet, as witnessed by their shrewd alliances with edgy counterculture icons like Jeff Gordon and Nicki Minaj. Is it unusual that Pepsi would pass up an opportunity to slap its “live for now” catchphrase - or “packed with now-itude,” or “now is the new later’s sooner,” or whatever it is nowadays - over each of the clip’s 272 seconds? Certainly. But perhaps an absence of signature branding is its own type of branding. Black is white. Night is day. Grass is trees. It’s all connected. The truth is out there.

Joseph Kony: He’s still on the loose in that continent that’s not our continent - you know, the one with the scenic vistas and the infectious rhythms and the genocide - and, improbably, our outrage-ometers remain on tilt two full years after the first Kony clip hit the Internet. What better way could there be to distract us than with a shiny object? And what object is shinier than a hoverboard? Just look at that thing glint in the sun! It even makes a little whirring noise! Anyway, Kony, I know you’re going to read this, so let me be the first to deliver a message: No dice, dude. Also, if you could stop killing people, that’d be awesome. Thx.

HBO: Don’t let the stern-voiced, dripping-with-ominousness promos for Game of Thrones fool you - HBO is no naïf in the ways of stealth video virality. Anyone wise in words immediately identified “hoverboard” as an anagram for “HBO Rod Rave,” a new drama about a raver named Rod that will debut some time this year. Or maybe it’s for a HBO comedy named “Rad Over,” about the wacky misadventures of an extreme-sports retiree. I refer you once anew to Occam’s Razor, which states that the most logical and obvious solution is usually the correct one.

Lady Gaga: She’s as much a chameleon as, uh, a chameleon, and has been known to adopt new guises at a moment’s notice (albino android, unhatchedalienfetus, rack of lamb, etc.). Look very closely when the sun glints off the right dorsal undercarriage of the hoverboard at the 1:37 mark of the clip - that is clearly Gaga’s indiscernible-characters bicep tattoo. That’s right: Lady Gaga is the hoverboard, literally.

Boeing: Ask yourself this: When hoverboard technology becomes readily available to the masses, who stands to lose the most? The makers of military weaponry like the Apache helicopter, that’s who. Why spend $800 trillion on the development of a new kablammo-machine when you can stick Jack Bauer on a hoverboard, encase him in body armor and deliver death-from-above with a more personal touch? Surely it’s not a coincidence that Boeing chose the day after the debut of “Belief” to announce a new 10-figure military contract. Again, connect the dots.