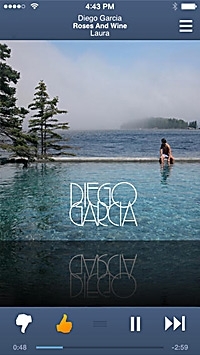 Pandora’s stock was down 5% in afternoon trading following news of the softer-than-expected listener hours. The company also said it will phase out the release of monthly listener metrics by mid-year.

In February, listener hours on Pandora increased 9% from a year ago to 1.5 billion, but that growth rate was down from 13% in January. The number of active users reached 75.3 million, up 11% from a year earlier versus a 12% gain in the prior month. Pandora’s share of the total radio audience increased to nearly 9%.

In a research note today, JPMorgan analyst Doug Anmuth suggested Pandora’s listener hours may have taken a hit from the launch of Beats music, the high-profile new music subscription service launched in late January. “Beats Music has been spending aggressively on marketing campaigns, with a focus on celebrity endorsements and TV ads,” he wrote.

By contrast, Pandora has historically not spent much marketing its brand. Company executives, however, have suggested the marketing budget will be increased marginally to support engagement and listener growth. The company also faces competition for listeners from Apple’s iTunes Radio, launched in September, iHeartRadio and Rdio.

The JPMorgan research note pointed to findings released yesterday by Edison Research and Triton Digital showing Pandora still leads competing music services in awareness, usage and app downloads. It has 70% awareness, for example, compared to 48% for iHeartRadio, 47% for iTunes Radio, Rhapsody’s 40% and Spotify’s 28%.

The company also said it is ending the monthly report because advertisers now have access to listener data from third-party providers to make accurate side-by-side comparisons. Pandora will provide its last monthly listener report in June, for the month of May. It will continue to release listener metrics quarterly.

Pandora reported a fourth-quarter profit of four cents on revenue of $200 million. That marked a 52% sales gain from a year ago. The company’s forecast for the current quarter, however, fell short of analyst expectations.