Millennials Consume Content Every Waking Hour (And Then Some)

Addendum: For the report, Crowdtap partnered with Ipsos MediaCT to survey 839 Millennial men and women online in January 2014.

Millennials are giving new meaning to the “always-on” consumer because they are on even when they are supposed to be off.

Millennials are apparently spending 18 hours per day consuming media. The hours are compounded, meaning that a person watching TV and checking Instagram at the same time for one hour would rack up two hours of media consumption -- one for each device. That’s according to new research from Crowdtap, a social analytics platform.

Even compounded, that doesn’t leave much time for things like, oh, I don’t know, sleep?

Calling them “always-on consumers” alone doesn’t appear accurate, though. Crowdtap says 30% of Millennials’ media time is spent with content created and curated by their peers, which means they are also acting as “always-on publishers.”

Broken down, Millennials spend 18% of their time on social networking sites, which is still less than the 20% of time they spend browsing the Internet, though I’m sure those two overlap. They spend 13% of their time watching live TV and 10% watching pre-recorded TV. 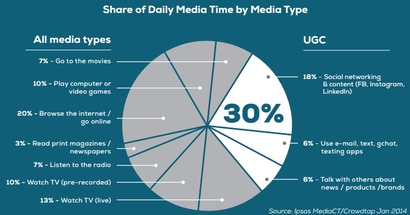 In the online world, marketers have been fearful that banner ads are not up to scratch, and Crowdtap’s study doesn’t do much to alleviate the concern.

Out of 16 media types listed -- which the respondents ranked with regard to how often they are “used” -- banner ads check in at the bottom. The study says 12% of Millennials “use” banner ads on a daily basis, which seems high. Then again, the figure citing that 71% use social networking every day seems low.

Over half (53%) say user-generated content has an influence on purchase decisions, while 44% say traditional media does. Banner ads check in at 23%, which might actually make some marketers happy.

The whole thing is somewhat of a catch-22 -- consumers are spending more time with media, but nearly one-third of that time is with user-generated content. Advertisers know this, but they are still figuring out how to get their message to fit in a world filled with peer content, and they aren’t ready to dive in full-steam ahead to compete with that content until they get a better feel for it.

For example, Omnicom last week struck an ad deal with Instagram, but the holding company apparently won’t “spend anywhere near $100 million on the platform.” Other tech companies are suggesting something completely different to advertisers: if you can’t beat user-generated content, then useit.